The Ups and Downs of Crater Lake

The elevation data show the distinct topography of Mount Mazama and the crater lake that fills its caldera.

Despite the hype created by smallsat LEO constellations, the traditional market is expected to remain the dominant source of revenue globally for building and launching satellites.

“The Space Report” contains worldwide space facts and figures, and is illustrated with photographs, charts, and graphs detailing the benefits of space exploration and utilization, the challenges facing the space sector, opportunities for future growth, and the major factors shaping the industry. 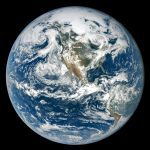