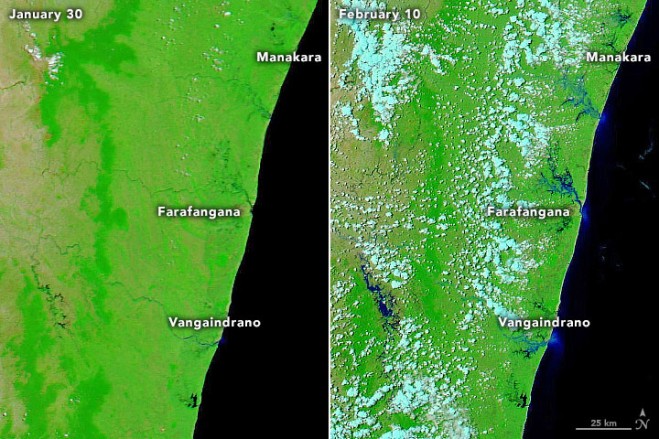 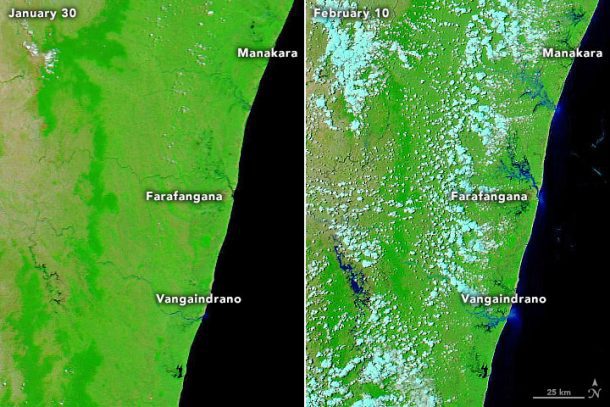 Tropical Cyclone Batsirai swept over the Indian Ocean and into central and southern Madagascar on February 5-6, 2022, bringing torrential rain, flooding and high winds. The storm devastated entire villages, killing at least 120 people and leaving tens of thousands displaced, according to the country’s Office of Risks and Disasters.

The cyclone came just two weeks after the island nation was struck by Tropical Storm Ana, which followed a series of heavy rainstorms in mid-January. Flooding and landslides killed at least 58 people and displaced more than 70,000.

Flooding was visible on February 10 (above right) when the Moderate Resolution Imaging Spectroradiometer (MODIS) on NASA’s Aqua satellite passed over. In this comparison of false-color imagery, which uses MODIS bands 7-2-1, areas flooded with sediment-laden water appear blue. The flooding is particularly visible around the cities of Manakara, Farafangana and Vangaindrano, which lie south of Mananjary. The same area is shown on January 30, between recent storms.

In its wake, Batsirai caused water and power outages, along with destroyed or damaged buildings and schools. Relief efforts were underway, although washed out roads and bridges have made some areas inaccessible, according to the United Nations Office for the Coordination of Humanitarian Affairs.