On June 10, 2022, Las Vegas reached a record daily high temperature of 109 degrees Fahrenheit (43 degrees Celsius), and temperatures of the ground surface itself were higher still. 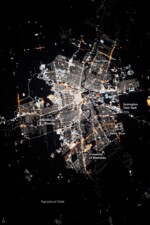 While in orbit above southern Canada, an astronaut aboard the International Space Station (ISS) took this nighttime photograph of Winnipeg, in the Province of Manitoba, Canada.

The Black Fire Blows Up in New Mexico

The state has seen more than half a million acres burned this year in early season wildland fires, and forecasters predicted conditions could worsen through the end of the month.

On May 5, 2022, Space Flight Laboratory (SFL) and GHGSat Inc. announced the successful completion of laboratory testing on the GHGSat-C3, C4 and C5 microsatellites at SFL’s facility in Toronto.

From geostationary orbit, 36,000 kilometers above Earth’s surface, this state-of-the-art European instrument will continuously monitor lightning over more than 80% of Earth’s disc for early warnings of dangerous storms.

Space Foundation, a nonprofit advocate organization founded in 1983, announced that honorees accepted awards at the 37th Space Symposium held April 4-7, 2022, at The Broadmoor in Colorado Springs, Colo., for their distinguished achievements in the global space ecosystem.

As a geopolitical and devastating humanitarian crisis unfolds in Ukraine, The HALO Trust (HALO) is partnering with Esri to mobilize an immediate and impactful humanitarian response. 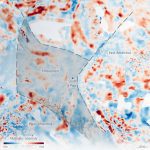 It’s difficult to know what lies beneath a blanket of kilometers-thick ice, so it’s hardly surprising scientists have long contested the shape and geology of the ancient supercontinent from which East Antarctica formed more than a billion years ago.

Researchers have found a way to remotely determine if protected female bottlenose dolphins are expecting a calf using aerial photos taken from drones.

Tropical Cyclone Batsirai swept over the Indian Ocean and into central and southern Madagascar on February 5-6, 2022, bringing torrential rain, flooding and high winds.