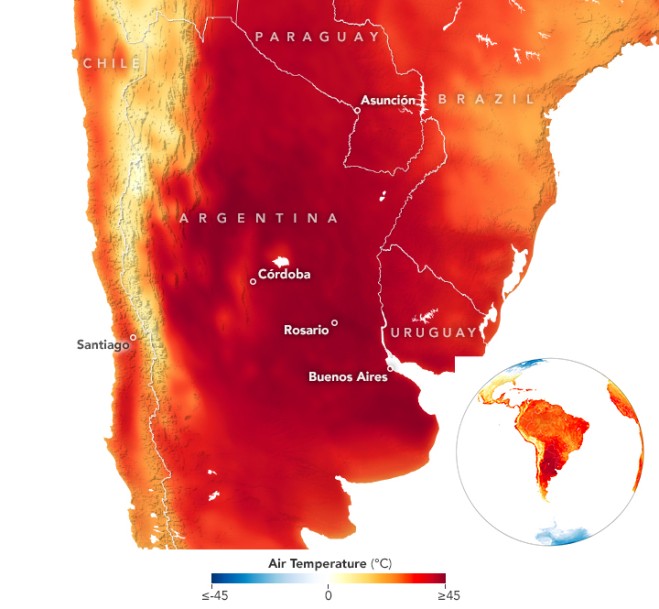 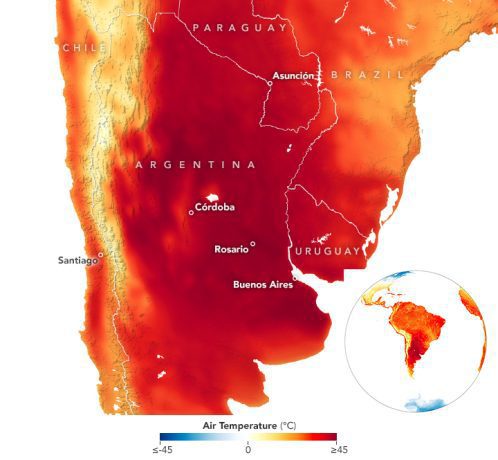 Summer south of the equator is proving to be a scorcher. In mid-January 2022, sweltering heat gripped central South America and temperatures soared to more than 40°C (104°F). At the time, it was the hottest place on the planet. That title soon shifted to Western Australia, where temperatures climbed to more than 50°C (122°F) and a town north of Perth tied for the hottest temperature ever measured in the Southern Hemisphere (preliminary data).

The searing heat is apparent on this map, derived from the Goddard Earth Observing System (GEOS) model. The map depicts air temperatures at 2 meters (about 6.5 feet) above the ground. The darkest reds indicate where temperatures were highest on Jan. 11, 2022, in Argentina.

According to Argentina’s National Meteorological Service (SMN), ground stations in Buenos Aires recorded a temperature of 41.1°C (106°F) on January 11. That’s the city’s second-hottest day on record. Elsewhere in Argentina, temperatures in Córdoba and Punta Indio climbed above 41°C. The extreme heat extended west toward the Andes Mountains as well as north into Paraguay and Uruguay.

The heat took a toll on Argentina’s power grid, leaving more than 700,000 customers without power. The high temperatures were also expected to scorch crops, such as soy and corn, that have already suffered from extended drought.