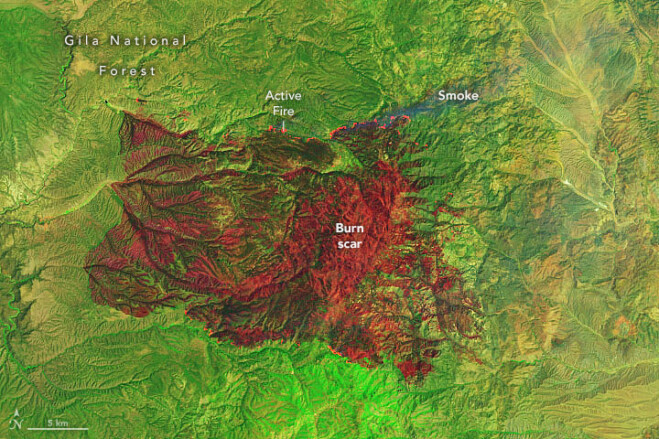 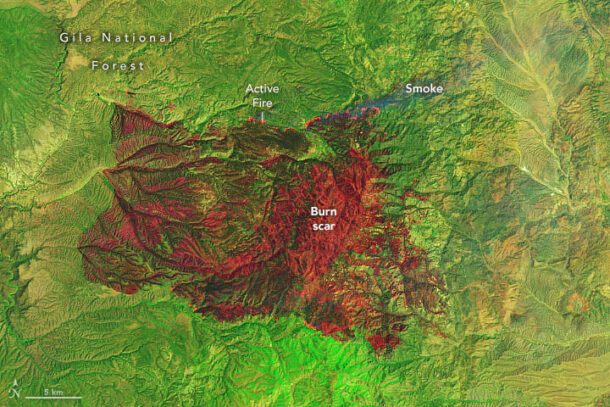 A new wildfire erupted on May 13, 2022, in the Gila National Forest in southwest New Mexico. The state has seen more than half a million acres burned this year in early season wildland fires, and forecasters predicted conditions could worsen through the end of the month.

The Black fire began burning in the Aldo Leopold Wilderness Area in the Black Range, about 30 miles northwest of Truth or Consequences, New Mexico. On May 16, the fire blew up, tripling in size from 18,000 acres to more than 56,000 acres. A blow-up is a sudden increase in fire intensity or rate of spread. The blow-up of the Black fire on May 16 produced a small pyrocumulonimbus cloud as the fire ran east and crossed the Continental Divide.

As of May 22, the Black fire had burned more than 130,000 acres, becoming the second-largest fire burning in the state. The perimeter was 8 percent contained, with more than 600 firefighters working the blaze.

This false color image was acquired on May 21, 2022, by the Operational Land Imager (OLI) on Landsat 8, combining shortwave infrared, near infrared and visible light. Near and shortwave infrared help penetrate clouds and smoke (gray-white) to reveal the hotspots associated with active fires (red). With this combination, burned areas appear reddish-brown.

The Black fire is one of several large uncontained fires burning in New Mexico, including the Calf Canyon-Hermits Peak Fire. As of May 23, 2022, that fire had exceeded 300,000 acres—the largest in state history—and was 40 percent contained. New Mexico has had more than 300 fires so far in 2022, burning more than 580,000 acres, according to the National Interagency Fire Center (NIFC). That is nearly five times as much acreage as was burned in all of 2021.