A four-year underground mapping project at Stonehenge was completed recently, yielding new maps and discoveries. The project used ground-penetrating radar, high-resolution magnetometers and other remote-sensing equipment to map the area to a depth of roughly 10 feet.

The water hyacinth, a popular flowering floating plant native to the Amazon, is one of the world’s fastest-spreading plants. The plant is popular with water gardeners for its splendid flowers and glossy weeds, but its ability to thrive has made it a tremendous pest, particularly in Africa’s Lake Victoria.

What was once the world’s fourth largest lake, the Aral Sea has been the victim of a major water diversion project undertaken in the 1960s and is now a polluted puddle compared with its former self.

The lava outflow on the Holuhraun field northeast of Iceland's Bardarbunga volcano continues unabated. The lava field has grown to cover an area greater than 25 square kilometers.

The turquoise lake in the crater of the Kawah Ijen volcano looks serene and inviting. It also happens to be the world’s largest acidic lake. The water in the crater lake has a pH less than 0.3 on a scale of 0 to 14 (7 is neutral). For comparison, lemon juice has a pH of 2; battery acid has a pH of 1. That acidity affects the chemistry of nearby river ecosystems, including the river Banyupahit.

Earth Pulling Apart at the Seams

Like some fantastic land conjured by a storyteller, Ethiopia’s Danakil Depression (or Afar Depression) exhibits some uncommon wonders: lava that burns blue, bright yellow hot springs and lakes of bubbling mud. These otherworldly oddities are all manifestations of a tectonic process called continental rifting.

Saharan Dust Journeys Across the Atlantic

The combined strength of two storms that merged on Aug. 5, 2012, gave birth to an unusually large, powerful and long-lasting cyclone that churned over the Arctic in early August 2012. 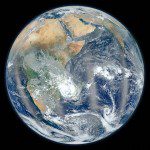 People love images of the full disk of Earth as it would appear from space. During the last week of January 2012, NASA science colleague Norman Kuring took some fresh data from the agency’s newest Earth observation satellite, projected them onto a disk and voila—3 million people viewed the image in a week! The wave of interest is still spreading across the Internet and social media, but have you ever wondered how these images are made?

This one-foot resolution, digital aerial image of Joplin, Mo., was collected May 24, 2011, at approximately 9:30 a.m. The image shows the remains of Joplin High School, located at 21st and Indiana, just two days after a Level 5 tornado touched down on May 22, 2011 and destroyed most of the town. The image was