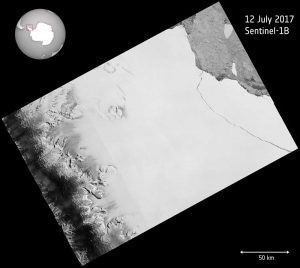 On July 12, 2017, the Copernicus Sentinel-1 collected this image of the final crack of a massive section of the Larsen-C ice shelf, spawning one of the largest icebergs on record and changing the outline of the Antarctic Peninsula forever. (Credit: Contains modified Copernicus Sentinel data (2017), processed by ESA)

Over the last few months, a chunk of Antarctica's Larsen C ice shelf has been hanging on precariously as a deep crack cut across the ice. Witnessed by the European Space Agency (ESA) Copernicus Sentinel-1 mission, a lump of ice more than twice the size of Luxembourg finally broke off on July 12, 2017.

The fissure first appeared several years ago, but it seemed relatively stable until January 2016, when it began to lengthen. In January 2017 alone it travelled 20 kilometers, reaching a total length of about 175 kilometers. After a few weeks of calm, the rift propagated a further 16 kilometers at the end of May, and then extended further at the end of June. More importantly, as the crack grew, it branched off towards the edge of the shelf, whereas before it had been running parallel to the Weddell Sea.

Scientists from Project MIDAS, an Antarctic research consortium led by Swansea University in the United Kingdom, used radar images from the Copernicus Sentinel-1 mission to keep a close eye on the rapidly changing situation.

The behemoth new iceberg weighs more than a million million metric tons and contains about the same amount of water as Lake Ontario. The iceberg's progress is difficult to predict. It may remain in the area for decades, but, if it breaks up, parts may drift north into warmer waters.

Since the ice shelf is already floating, this giant iceberg does not influence sea level. However, loss of such a large piece is of interest because ice shelves along the peninsula play an important role in buttressing glaciers that feed ice seaward, effectively slowing their flow. Previous events further north on the Larsen A and B shelves indicate that when a large portion of an ice shelf is lost, the flow of glaciers behind can accelerate, contributing to sea-level rise.