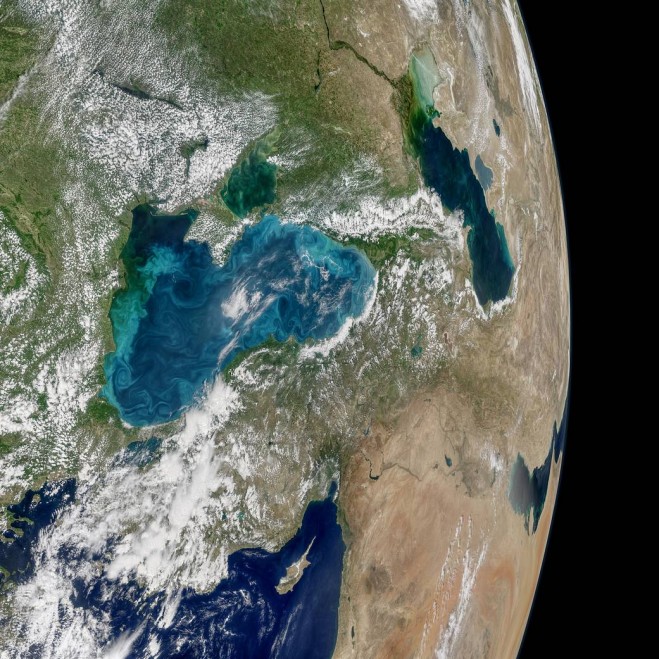 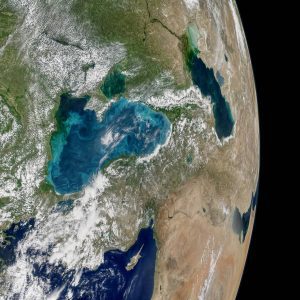 On May 29, 2017, the Moderate Resolution Imaging Spectroradiometer (MODIS) on NASA’s Aqua satellite captured the data for this image of an ongoing phytoplankton bloom in the Black Sea. The image is a mosaic, composed from multiple satellite passes over the region. (Credit: Norman Kuring, NASA’s Ocean Biology Processing Group)

Phytoplankton support fish, shellfish and other marine organisms, but large, frequent blooms can lead to eutrophication—the loss of oxygen from the water—and end up suffocating marine life.

One type of phytoplankton commonly found in the Black Sea is coccolithophores—microscopic plankton plated with white calcium carbonate. When aggregated in large numbers, these reflective plates are easily visible from space as bright, milky water.

“The May ramp-up in reflectivity in the Black Sea, with peak brightness in June, seems consistent with results from other years,” said Norman Kuring, an ocean scientist at NASA’s Goddard Space Flight Center. Although Kuring does not study this region, the bloom this year is one of the brightest to catch his eye since 2012.

Other types of phytoplankton can look much different in satellite imagery. “It’s important to remember that not all phytoplankton blooms make the water brighter,” added Kuring. “Diatoms, which also bloom in the Black Sea, tend to darken water more than they brighten it.”