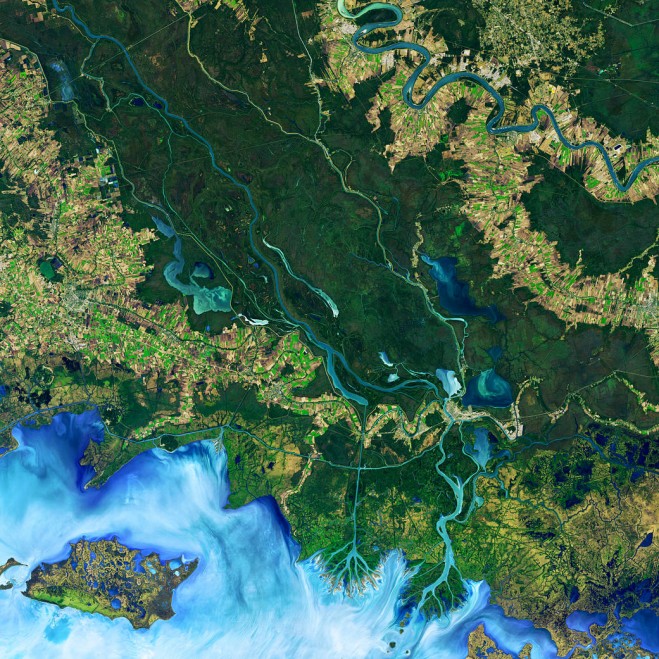 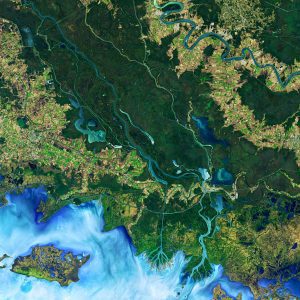 This false-color image, acquired by the Operational Land Imager (OLI) on Landsat 8, shows the area of study along the Atchafalaya Delta. The colors emphasize the difference between land and water while allowing viewers to observe waterborne sediment, which is typically absent from false-color imagery. (Credit: NASA Earth Observatory images by Joshua Stevens, using Landsat data from the U.S. Geological Survey and data from Ortiz, A. C., Roy, S., & Edmonds, D. A. (2017))

A new study shows that winds are responsible for the widespread growth of ponds in three watersheds along the Mississippi River. The paper, published in April 2017 in Geophysical Research Letters, shows that wind-driven waves can erode pond banks, leading them to migrate in the direction of the wind. In effect, researchers have shown that wind-driven erosion, which nibbles away coastlines and the edges of larger bodies of water, also can happen inland on small scales.

The researchers analyzed roughly 10,000 satellite images taken between 1982 and 2016, examining land and water pixels to look for inland change across the Mississippi River Delta.

“Up until now, a lot of focus has been on coastal retreat,” said Alejandra Ortiz, a marine geologist at Indiana University. Instead, Ortiz and colleagues focused on internal fragmentation: what happens when land becomes subdivided by inland erosion processes.

Ortiz and her co-authors found that ponds in the Mississippi Delta tended to expand in a southwesterly direction, which is the same direction as the prevailing winds (which blow out of the northeast). This was especially true in Terrebonne and Barataria basins, where 80 percent of the ponds are expanding. The other study basin, the Atchafalaya-Vermillion, was deemed stable, with nearly as many ponds contracting as expanding—roughly 30 percent.