On June 17, 2017, lightning reportedly ignited a deadly wildfire that spread across the mountainous areas of Pedrógão Grande—a municipality in central Portugal located about 160 kilometers northeast of Lisbon.

Malta from Space via Laser

This image of Malta, captured by the European Space Agency (ESA) Copernicus Sentinel-2B satellite, is one of the first sets of images delivered via Alphasat, which is in geostationary orbit 36,000 kilometers above Earth. 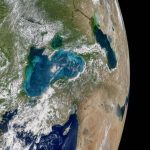