Mount Ruapehu is a 2,797-meter (9,177-foot) peak on New Zealand’s North Island that’s popular with skiers and snowboarders and other outdoor adventurers. One of the most-active volcanos in New Zealand, major eruptions occur approximately every 50 years, most recently in 1895, 1945 and 1995.

In late April and early May 2016, satellite sensors detected signs of a volcanic eruption in the far South Atlantic Ocean between South America and Antarctica. Mount Sourabaya, a stratovolcano on Bristol Island, appeared to be erupting for the first time in 60 years. 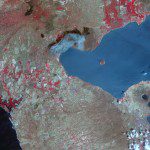 After more than 100 years of dormancy, Nicaragua’s Momotombo volcano has erupted more than 80 times in the last three months. Momotombo rises from a chain of 19 active volcanos that run northwest to southeast in western Nicaragua, one of the most volcanically and seismically active areas on Earth.

The lava outflow on the Holuhraun field northeast of Iceland's Bardarbunga volcano continues unabated. The lava field has grown to cover an area greater than 25 square kilometers.