For more than a month, the northern Syrian city of Kobani has been at the heart of the struggle between Islamic State (ISIS) fighters and Kurdish defenders, who are battling to stop the region from falling into the hands of the militants. ISIS launched its first attack on the Syria-Turkey border town in September 2014

Climate change is already affecting the American people in far-reaching ways.” So begins an extensive report issued by the U.S. Global Change Research Program on May 6, 2014. The Global Change Research Act of 1990 requires that Congress and the president should be presented every four years with an assessment of the effects of climate

Gaining Some Perspective on Winter 2014 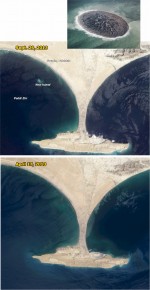 On Sept. 24, 2013, a major earthquake rattled western Pakistan, killing at least 350 people and leaving more than 100,000 homeless. Amidst the destruction, a new island was created offshore in the Paddi Zirr (West Bay) near Gwadar, Pakistan. Likely a “mud volcano,” the island rose from the seafloor near Gwadar on Sept. 24, shortly

Tom Painter is very interested in the purity of snow. Based at NASA’s Jet Propulsion Laboratory and the University of California, Los Angeles, he studies how much water is stored in snowpack and how that snow looks to satellites. He also studies the effects of light-absorbing impurities—dark-colored particles like dust and soot that coat snow.

Click here to see our "Imagery in the News Article"

Landsat satellites were designed to gather images of Earth’s land surfaces. During the last four decades, however, the satellites also have been useful for observing blue parts of the planet. Landsat particularly has enriched the study of coral reefs. Scientists used earlier generations of Landsats to create a global image library of coral reefs. They