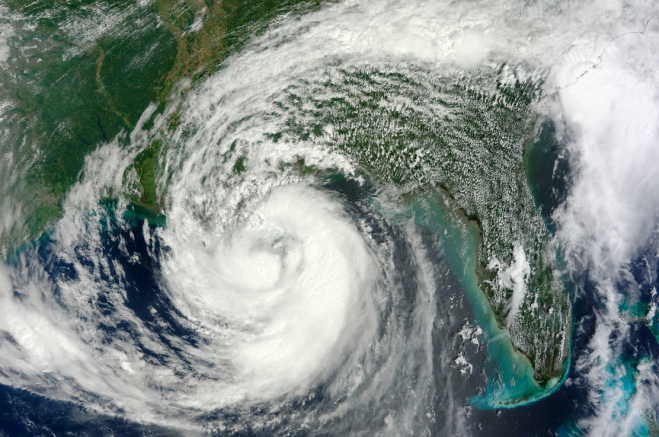 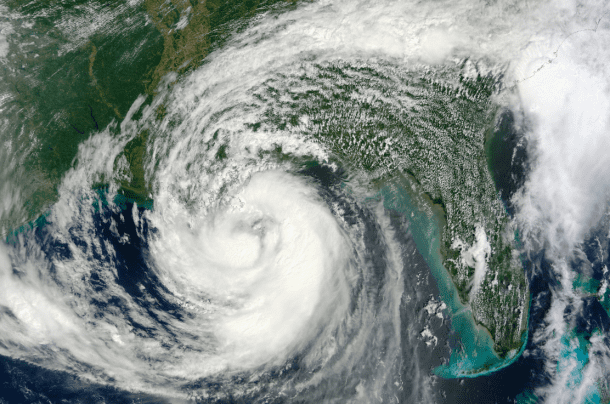 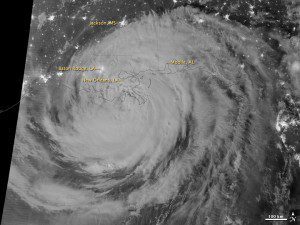 The MODIS instrument on NASA’s Terra satellite captured this image of Isaac in the Gulf of Mexico on Aug. 28, 2012. NASA’s Suomi-NPP satellite’s VIIRS instrument captured a nighttime view of the storm on Aug. 27-28

As it passed through the northern Caribbean, around south Florida, and into
Louisiana and the Middle Mississippi Valley, Hurricane Isaac brought lots of rain, some of it beneficial and some of it not. Using data from the Tropical Rainfall Measuring Mission (TRMM) satellite, NASA created images of rainfall totals generated along the storm’s path.

The slow-moving hurricane was a category 1 when it made landfall near the mouth
of the Mississippi River in southwestern Louisiana at about 6:45 p.m. local time on
Aug. 28, 2012. Its highest rainfall totals for the Aug. 21-27 period were recorded over the waters of the northeast Caribbean and parts of the central and eastern portion of the Florida peninsula in and around Lake Okeechobee. 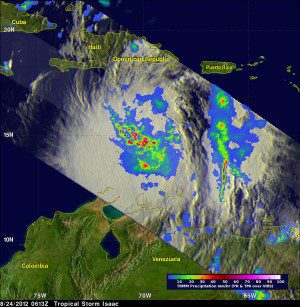 The most significant rainfall over land in the northeast Caribbean was over southwest Haiti and the southern coast of the Dominican Republic where between 120-200 mm (5-8 inches) fell. The storm caused extensive flooding in Haiti and was blamed for 24 fatalities, while the neighboring Dominican Republic reported five fatalities.

Over Florida, the rainfall totals were much higher. Prior to the rain from Isaac, an upper-level low spawned numerous showers and thundershowers over southeastern Florida. The combination of the storms resulted in more than 160 mm (6 inches) of rain in central Florida, with as much as 320 mm (13 inches) over Lake Okeechobee. 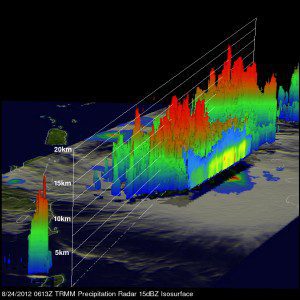 Color-coded images show Hurricane Isaac’s precipitation rates and storm structure on Aug. 24, 2012. The top image illustrates an analysis of rainfall from TRMM’s Microwave Imager (TMI) and Precipitation Radar (PR) that showed an increase in rainfall intensity in a large area around Isaac’s center of circulation. TRMM detected rain rates of over 90 millimeters (about 3.5 inches) per hour within several strong convective storms. The bottom image shows how TRMM PR data were used to make a 3-D view of Isaac’s structure. This view revealed that some storms near Isaac’s center were reaching heights of about 16 kilometers (10 miles) and contained Isaac’s heaviest rains.

New Orleans reported the highest amount of rainfall, with up to 508 mm (20 inches). Isaac was blamed for five fatalities in Louisiana and two in Mississippi. Farther north, however, Isaac brought some beneficial rains to parts of the drought-stricken Midwest, where rainfall totals on the order of 40 mm to as much as 120 mm (2-5 inches) spread relief across northern Missouri, Illinois, Indiana and Ohio.