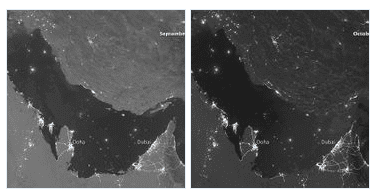 VIIRS, shown here prior to integration with NASA’s Suomi NPP satellite, is a powerful scanning radiometer that collects visib le and infrared imagery and radiometric measurements of the land, atmosphere, cryosphere and oceans. 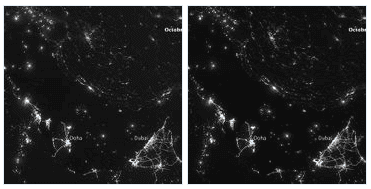 Urbanization is most apparent along the northeastern coast of Saudi Arabia, in Qatar and in the United Arab Emirates (UAE). In Qatar and UAE, major highways can be discerned by nighttime lights.

The Visible Infrared Imaging Radiometer Suite (VIIRS) on NASA’s Suomi NPP satellite captured these nighttimeviews of the Persian Gulf region on Sept. 30, Oct. 5, Oct. 10 and Oct. 15, 2012. The images are from the VIIRS“day-night band,” which detects light in a range of wavelengths from green to near-infrared and uses filteringtechniques to observe signals such as gas flares, auroras, wildfires, city lights and reflected moonlight.Each image includes an inset of the moon in four different phases. Sept. 30 shows the Persian Gulf by the lightof the full moon; Oct. 15 shows the effects of a new moon. As the amount of moonlight decreases, some landsurface features become harder to detect, but the lights from cities and ships become more obvious.Captions