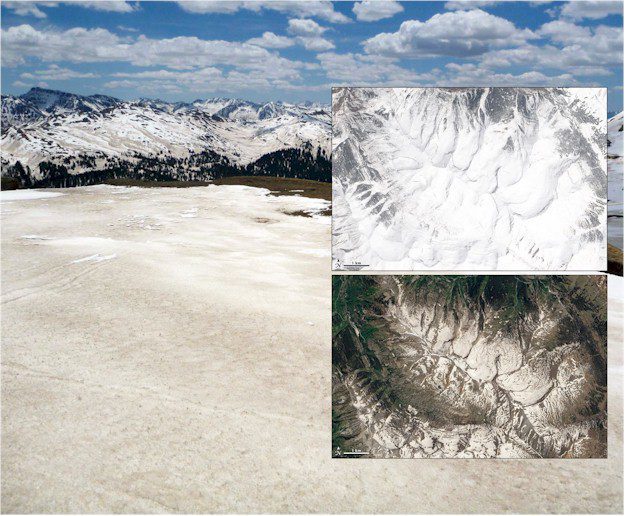 Fresh snow reflects 80-90 percent of the sunlight that falls on it. Dusty snow, however, only reflects 50-60 percent, absorbing the rest. The two Landsat 8 images above show the mountains near Telluride, Colo., on May 3 and June 20, 2013.

Tom Painter is very interested in the purity of snow. Based at NASA's Jet Propulsion Laboratory and the University of California, Los Angeles, he studies how much water is stored in snowpack and how that snow looks to satellites. He also studies the effects of light-absorbing impurities”dark-colored particles like dust and soot that coat snow.

Dirty snow usually melts faster than fresh snow because it absorbs more energy from the sun, and that's not just a problem in sooty, gritty cities. Except for some mountains and high plateaus, snow cover naturally retreats from Earth's surface in the spring and early summer. Dust on top of that snow”like the dirt covering snow on Colorado's San Juan Mountains, above”significantly accelerates the process. 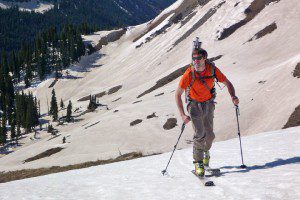 For nearly a decade, Painter and colleagues have been examining the effects of snow impurities in the mountains of the Colorado River Basin, using a combination of ground-based measurements, energy-balance towers and satellite data. Aircraft-mounted instruments also have helped monitor snow cover and depth. All of that information is included in a computer model that Painter and his team use to estimate how much impurities can enhance snowmelt. The effects are surprisingly potent.

Dust on the snowpack of the Colorado River Basin can shorten the duration of snow cover by 21 to 51 days, Painter says. For comparison, if you kept the snow clean and increased air temperatures by 2 to 4 degrees Celsius (4 to 7 degrees Fahrenheit), the snow cover would be shortened by just 5 to 18 days.

Here's another way of thinking about this: If you want to get the same amount of sunlight absorbed by the clean snowpack, you would have to move that snow closer to the sun than Venus.