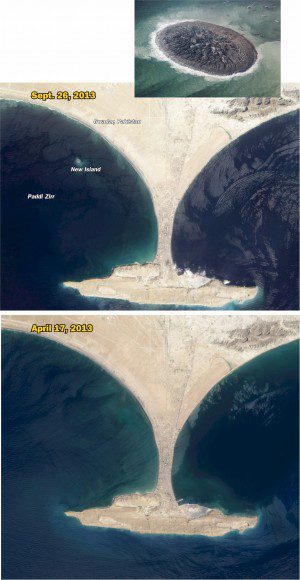 On Sept. 26, 2013, the Advanced Land Imager on NASA's Earth Observing-1 satellite captured the top image of Pakistan's new island, which sits roughly 0.6 miles offshore. The bottom image, acquired by the Operational Land Imager on the Landsat 8 satellite, shows the same area on April 17, 2013. The aerial photograph (inset) provides a close-up of the landform.

On Sept. 24, 2013, a major earthquake rattled western Pakistan, killing at least 350 people and leaving more than 100,000 homeless. Amidst the destruction, a new island was created offshore in the Paddi Zirr (West Bay) near Gwadar, Pakistan.

Likely a mud volcano, the island rose from the seafloor near Gwadar on Sept. 24, shortly after the earthquake struck about 230 miles inland. In the accompanying satellite images, lighter shades of green and tan in the water reveal shallow seafloor or suspended sediment. The water depth around the new island is roughly 50 to 65 feet,Â according to Asif Inam of Pakistan's National Institute of Oceanography. The aerial photograph provides a close-up of the landform, estimated to stretch 250 to 300 feet across and standing 60 to 70 feet above the water line. The surface is a mixture of mud, fine sand and solid rock.