The U.S. Geospatial Intelligence Foundation (USGIF) is accepting nominations for its 2016 Awards and Scholarship programs. 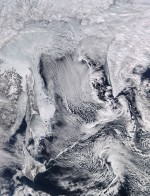 A NASA satellite captured a stunning image of winter’s effects on the Sea of Okhotsk, which is part of the western Pacific Ocean surrounded by mostly Russian territory as well as the Japanese island of Hokkaido.