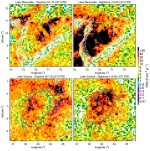 NASA compiled a new map of lightning flash frequency from around the world using satellite observations from the Lightning Imaging Sensor on the agency’s Tropical Rainfall Measuring Mission satellite and the Optical Transient Detector on the OrbView-1 Microlab satellite.

Researchers at the University of Alabama in Huntsville recently shipped a Lightning Imaging Sensor to the Johnson Space Center in Texas in anticipation of its planned flight to the International Space Station (ISS) in March 2016.