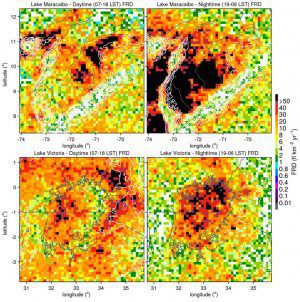 Using data from the Lightning Imaging Sensor (LIS) onboard NASA's Tropical Rainfall Measurement Mission, a new study determined that Lake Maracaibo in Venezuela is the new lightning capital of the world.

The top spot was previously thought to be Africa's Congo Basin, but a research team built a high-resolution dataset based on 16 years of satellite information and concluded that Lake Maracaibo's 233 flashes per square kilometer per year earned the title.

Located in northwest Venezuela along part of the Andes Mountains, it is the largest lake in South America. Storms commonly form there at night as mountain breezes develop and converge over the warm, moist air over the lake. These unique conditions contribute to the development of persistent deep convection, resulting in an average of 297 nocturnal thunderstorms per year, peaking in September.

Africa remains the continent with the most lightning hotspots, according to the study, home to six of the world's top 10 sites for lightning activity. The majority of the hotspots were by Lake Victoria and other lakes along the East African Rift Valley, which have a similar geography to Lake Maracaibo.

The full research report can be found in the Bulletin of the American Meteorological Society.