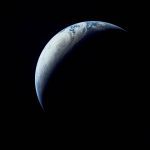 On Nov. 9, 1967, the uncrewed Apollo 4 test flight made a great ellipse around Earth as a test of the translunar motors and high-speed entry required of a crewed flight returning from the moon. A 70-millimeter camera was programmed to look out a window toward Earth and take a series of photographs from “high apogee.”

A composite image of Earth and its moon, as seen from Mars, combines the best Earth image with the best moon image from four sets of images acquired on Nov. 20, 2016, by the High Resolution Imaging Science Experiment (HiRISE) camera on NASA’s Mars Reconnaissance Orbiter.

TEMPE, Ariz., Feb. 5, 2016—Earth and environmental scientists have often had to rely on piloted aircraft and satellites to collect remote sensing data, platforms that have traditionally been controlled by large research organizations or regulatory agencies. Thanks to the increased affordability and dramatic technological advances of drones, or Unmanned Aerial Vehicles (UAVs), however, earth and

The Geography of Antarctica’s Underside

December 11, 2015 — Planetary scientists would be thrilled if they could peel the Earth like an orange and look at what lies beneath the thin crust. We live on the planet’s cold surface, but the Earth is a solid body and the surface is continually deformed, split, wrinkled and ruptured by the roiling of warmer

SPRINGFIELD, Va. — A team of researchers led by scientists at the National Geospatial-Intelligence Agency published a new map Sept. 1 that characterizes the Earth’s radioactivity and offers new and potential future applications for basic science research and nonproliferation efforts. The Antineutrino Global Map 2015, or AGM2015, is an unprecedented experimentally-informed model of the Earth’s

NASA’s Kepler mission has confirmed the first near-Earth-size planet in the “habitable zone” around a sun-like star. This discovery and the introduction of 11 other new small habitable-zone candidate planets mark another milestone in the journey to finding another “Earth.”

NASA Releases Detailed Animation of the Dark Side of the Moon

NASA’s Scientific Visualization Studio released an animation of the crater-filled dark side of the moon, the side of Earth’s natural satellite we never see.