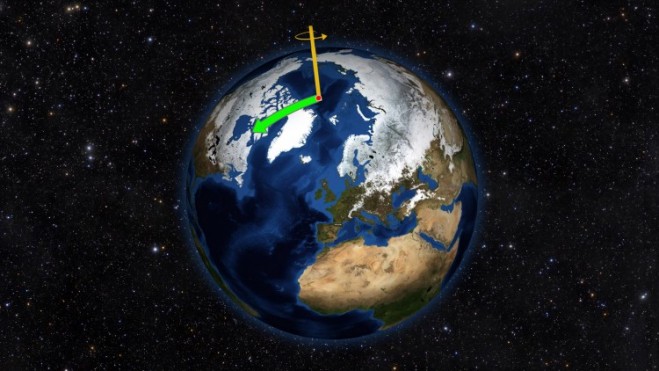 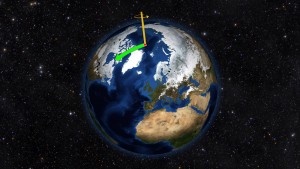 Earth doesn’t always spin on an axis running through its poles; it wobbles irregularly through time, altering direction due to changes in water mass on Earth. (Credit: NASA/JPL-Caltech)

Using satellite data on how water moves around Earth, NASA scientists solved two mysteries about wobbles in the planet’s rotation. Earth’s spin axis drifts slowly around the poles; the farthest away it has wobbled since observations began is 37 feet (12 meters). These wobbles don’t affect daily life, but they must be taken into account to get accurate results from GPS, Earth-observing satellites and ground-based observatories.

In a paper published in Science Advances, researchers found that the loss of mass from Greenland and Antarctica’s rapidly melting ice sheet alone don’t generate the amount of energy needed to pull the spin axis as far as it has shifted.

“The bulk of the answer is a deficit of water in Eurasia: the Indian subcontinent and the Caspian Sea area,” said Surendra Adhikari of NASA’s Jet Propulsion Laboratory. 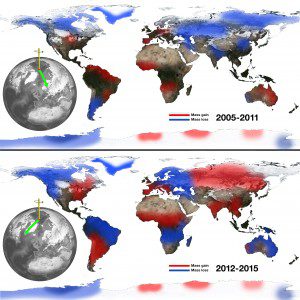 A figure shows the relationship between continental water mass and the east-west wobble in Earth’s spin axis. Losses of water from Eurasia correspond to eastward swings in the general direction of the spin axis (top), and Eurasian gains push the spin axis westward (bottom). (Credit: NASA/JPL-Caltech)

Although this region has lost much less water mass due to depletion of aquifers and drought than in the ice sheets, the spin axis is very sensitive to changes occurring around 45 degrees latitude, both north and south.