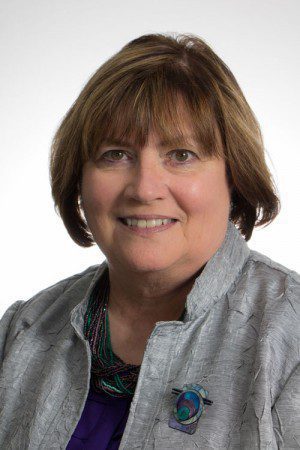 The U.S. Geological Survey (USGS) oversees the Landsat Earth-observation program, is the government's lead civilian mapping agency, and also operates the seismic and water-condition sensing networks. In addition to measurement, USGS uses these inputs for its own scientific work to assess ecosystems, energy and minerals, environmental health, natural hazards, water and climate, and land-use change.

V1 Editorial Director Matt Ball spoke with Suzette Kimball, USGS director, who has a PhD in environmental sciences with a specialty in coastal processes. The conversation touches on funding, sensing, mapping and public engagement.

EIJ: I was pleased to hear a lot of affirmation of the good work USGS is involved in during the recent congressional hearing. I was expecting some partisan debate.

Kimball: The USGS has not had an appropriations hearing in four or five years, so we appreciated the fact that the Senate Energy and Resources Committee wanted to have this oversight hearing. It's an opportunity for us to discuss the priorities of the administration and the priorities that the science drives us to at USGS vis-a-vis the kinds of issues and priorities that Congress hears from their constituencies. The hearing gave us a great opportunity for that dialog.

One of the things about USGS, because we have no regulatory responsibilities and we do not develop policy or rule making, we are generally viewed positively by both sides of the aisle. We appreciate that position and the support we get from our oversight committees in the House and Senate.

I never look at the opportunity to testify as a negative experience. I look at is as a positive opportunity to explain what we're doing, and hear and understand those issues play out on the ground in the constituencies of the representatives.

EIJ: There was some detailed discussion during the hearing regarding the efforts to map Alaska. How big is that challenge, and how is it progressing?

Kimball: We're really excited about that effort. There are a number of different things going on with geologic and topographic mapping. Alaska is one of those places that had less than state of the art mapping resources, which was leading to severe public-safety risk. Being able to come together in our true partnership with the state and a number of other federal agencies to address mapping issues has been a high priority for us.

Alaska historically had not been mapped to modern standards. The challenge starts with the size of the state, which is one-fifth the size of the continental United States, extreme weather conditions and difficult terrain. It's always been a goal of USGS to map Alaska. The topographic mapping information we've had in the public domain is 50 to 60 years old and was collected at a time when new technology wasn't available to us to accurately map the state.

We're collecting high-resolution elevation data that is dramatically improving resource management, aviation safety, flood-inundation modeling, civil engineering and a variety of critical needs for Alaskans. The partnership has been in existence for the last five years, and we've acquired 63 percent of the state in high-resolution elevation data, which is one of the key datasets for the U.S. topo product. We've also been working in partnership with the state to collect imagery and update our national hydrography dataset.

As these datasets are updated, and this modern data becomes available, we are producing a new series of digital topographic maps for Alaska at 1:25,000 scale. They're distributed digitally in GeoPDF format and are downloadable to a mobile-mapping platform as well as to any other platform for analyses. We're also serving the data as a Web service so it can be consumed by products like Esri software or any other geospatial analytical tool.

EIJ: There was one comment in the hearing from Sen. Al Franken, noting that satellite imagery is a tool of the future. I found that somewhat ironic given that USGS pioneered satellite imaging with the Landsat program stretching back 30 years, but I also found it exciting that the technology has captured the imagination of political leaders. Are you excited about where the technology is headed?

Kimball: Satellite imagery is becoming more and more available, with commercial imagery more-readily available. Having said that, there are some significant changes taking place in terms of the information one can gather and the types of technology being developed to launch satellites.

One of the new advances is the cubesat, which takes a smallsat approach and can be launched on just about any kind of platform. You don't need to wait for one of the big rocket launches to get those in orbit. As technology evolves, and we are able to not only utilize nanotechnology but also to miniaturize so many types of sensors, we're able to launch and use these satellites for so many more applications.

NASA's GRACE satellite, for instance, looks at gravity signals; it can make inferences about groundwater and other geological observations. The new iterations of thermal imaging make a big difference in what we can say about soil moisture, forest canopy and those kinds of things.

The technology is evolving, and I think we'll see more utility in satellite-driven sensing systems as we move into the future.

EIJ: I'm also interested in the terrestrial sensing and streamgages growing in importance with our changing planet. I've heard there's been some underfunding of that network.

Kimball: Streamgages are, in fact, the workhorses of our water-resources activities. At the moment, we have 8,000 deployed across the country. About half of those are part of the flood warning system and are essential for use by the Weather Service for flood-hazard warning. At this particular point in time, we are funded, through our appropriation, for approximately 20 percent of the total cost of the system. Most of our streamgage network is funded through our cooperative water program, which is a venture between us and other entities, usually state agencies but also local agencies and in some cases groups such as friends of the local waterway.

The particular piece of legislation that put the cooperative water program into play identified that the federal share of the cost would be no more than 50 percent. In many locations, the cooperator is paying 70 percent or so of the cost of installing and operating those streamgages. The costs vary by location depending on access, stream conditions and a number of factors.

We have a robust system, however, there are many applications that are asking us to look at how we address our streamgage program in different ways. One aspect that emerged subsequent to Katrina is the use of rapidly deployable streamgages that can be put out in advance of an approaching storm or knowledge of extreme rainfall that may cause flooding.

The gages and the way we deploy them are evolving through time, and again, they are the underpinning of our water-resources work.

EIJ: There are other sensor networks coming online, such as the National Science Foundation's Earthscope and NEON program. What is your feeling about some of these efforts to gather more baselines, and will these sensor networks feed USGS science efforts?

Kimball: One of the great things about United States policy is free and open access to data. That means we have access to data being generated through systems we don't necessarily maintain. Similarly, USGS data are open and available in a free and open data policy for other organizations. That allows for identifying complementary uses for sensor networks and complementary deployments.

Earthscope are temporary arrays, but they can certainly provide additional information that enhances our ability to understand seismic conditions with information we gather from our advanced seismic system and global seismic networks. All of those play a part and come together to provide more-robust data sensors.

In terms of water resources, we have a four-way agreement among ourselves, the National Oceanic and Atmospheric Administration (NOAA), the U.S. Army Corps of Engineers and the Federal Emergency Management Agency (FEMA) to maintain in-situ monitoring systems for water resources. In terms of ocean and coastal observing, we work closely with NOAA. The underlying principle is the access to free and open data, and a commitment on the part of federal agencies and universities to work closely together.

EIJ: I'm curious about the momentum you're seeing for the 3D Elevation Program (3DEP) and the importance of that highly detailed dataset for the nation. What's your feeling in terms of the status and importance of 3DEP?

Kimball: I get asked frequently about my highest priorities; it's always in context of two or three items. I always respond that it's like asking me to pick which child I love the best, because we've got wonderful things going on in all of our mission areas.

I've been consistent in identifying 3DEP as a foundational capability that we have to do. This isn't a nice to do, it's absolutely an essential underpinning to understand many of the key science priorities in our other mission areas. From a leadership and prioritization perspective, 3DEP is a high-priority activity.

This is a great partnership with private industry that are flying the aircraft to gather the data. One of the most-important aspects is uplifting all the data into the public domain with an open and accessible public license that allows anybody to download the data and use it for a wide variety of analytics and value-added products.

The number of applications of our science is quite broad, and this data will benefit our study of volcanoes, landslides and ecosystem restoration. Within water, it will provide improved hydraulic modeling, flood modeling and sea-level-rise information.

Kimball: From my perspective, it's essential. The more we have the general public engaged in the science enterprise, the better they can understand how to effectively use this information, and the better opportunity we have to engage the next generation of scientists who are going to replace us.

We actively support citizen science. We've been talking about mapping, and our National Map Corps helps ground-truth and actually identify infrastructure and other aspects that go into our topographic and national mapping efforts. We also support a national phenology network that looks at synoptic changes in things like vegetation or wildlife. Our bird-banding effort has been recognized for decades, since the 1930s, and that involves citizen scientists for banding as well as undertaking the annual census of birds, which is hugely important for population ecology and tracking the health of those populations.

I could go on, as we have these efforts in each of our missions. We are extremely supportive of citizen engagement in our efforts, and we like to implement things that enhance such engagement.