First LDCM Images “Great Right Out of the Box”

Click here to see PDF of Imagery in the News 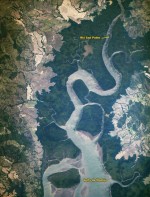 Suomi NPP Showcases  Low-Light Sensor Capabilities   The Visible Infrared Imaging Radiometer Suite (VIIRS) on NASA’s Suomi NPP satellite captured these nighttimeviews of the Persian Gulf region on Sept. 30, Oct. 5, Oct. 10 and Oct. 15, 2012. The images are from the VIIRS“day-night band,” which detects light in a range of wavelengths from green

Sandy vs. Katrina Comparing Two Monster Storms The scenes of devastation and wreckage that Superstorm Sandy (2012) and Hurricane Katrina (2005) left behind were tragically similar. But from a meteorological perspective, satellite data reveal the storms were very different. Both storms flooded major cities, cut electric power to millions and tore apart densely populated coastlines. Katrina, however, was

NASA Satellites Dissect Isaac’s Rainfall Patterns As it passed through the northern Caribbean, around south Florida, and into Louisiana and the Middle Mississippi Valley, Hurricane Isaac brought lots of rain, some of it beneficial and some of it not. Using data from the Tropical Rainfall Measuring Mission (TRMM) satellite, NASA created images of rainfall totals generated along the storm’s path.

From its vantage 824 kilometers (512 miles) above Earth, the Visible Infrared Imager Radiometer Suite (VIIRS) on the NPOESS Preparatory Project (NPP) satellite gets a complete view of our planet every day. This image from Nov. 24, 2011, is the first complete global image from VIIRS. The NPP satellite launched on Oct. 28, 2011, and

Night Lights Glimmer from Above and Below   The creative minds of the astronauts aboard the International Space Station (ISS) are always on the alert for a great photograph of Earth, and this one doesn’t disappoint. Taken onSept. 29, 2011, with a Nikon D3S digital camera and a 20mm lens, the image shows how the artificial light from human settlements appears

HERNDON, Va.,Oct. 24, 2011—GeoEye, Inc. (NASDAQ: GEOY), a leading provider of geospatial information and insight, announced today it received two new awards worth more than $25 million. These awards will increase the backlog for the Company's production services line of business. The first is a Delivery Order for "Enhanced GEOINT Delivery" for the National Geospatial-Intelligence

Looking Down on a Shooting Star

Many people have spent time outdoors under a dark sky, watching for “shooting stars” to streak across the firmament. While not actual stars, shooting stars do come from outer space in the form of meteoroids entering Earth’s atmosphere. This astronaut photograph, taken from the International Space Station (ISS) while over China, provides the unusual perspective