Flooding Continues Along the Missouri River 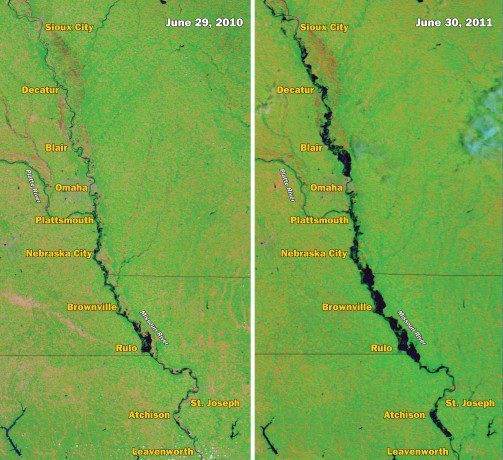 Floods advanced down the Missouri River at the end of June 2011, swelling the river significantly from Sioux City, Iowa, to Leavenworth, Kan. The Moderate Resolution Imaging Spectroradiometer (MODIS) sensor on NASA’s Aqua satellite captured the top-right image on June 30, 2011. For comparison, the top-left image shows the same area a year earlier on June 29, 2010.

Both images use a combination of visible and infrared light to increase contrast between water and land. Water is navy blue. Depending on land cover, land ranges in color from green to brown. Clouds are blue-green.

Could flooding along the Missouri River lead to another surge of flooding along the Lower Mississippi? Probably not, according to the U.S. Army Corps of Engineers. On June 21, 2011, the Associated Press reported that flood waters from the Missouri River weren’t expected to cause another surge of flooding, according to an Army Corps spokesperson, but the Missouri floods might slow the receding of floods on the Mississippi.