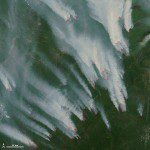 On July 11, 2012, more than 25,000 hectares (97 square miles) of forests were burning in Russia, according to the Russian Federal Forestry Agency. Most of the fires—uncontrolled wildfires in boreal forests—were in central and eastern Siberia, as shown in this image acquired on July 10 by NASA’s Aqua satellite.