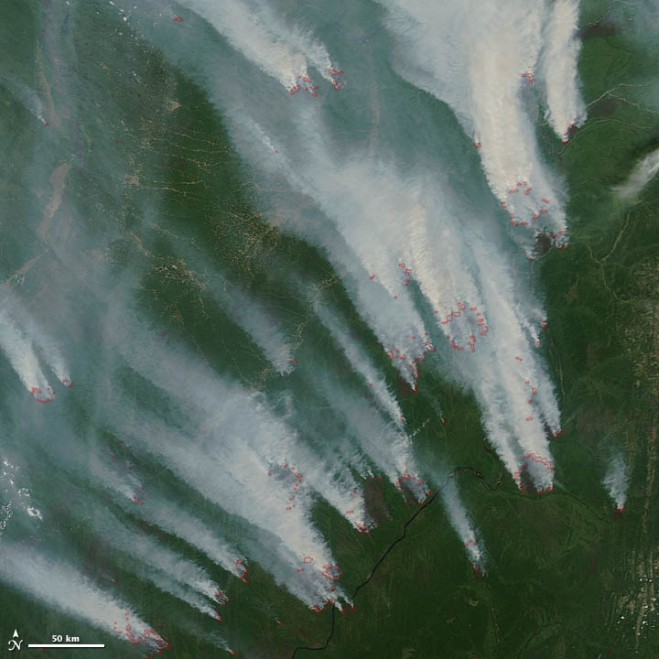 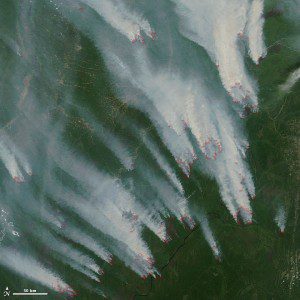 On July 11, 2012, more than 25,000 hectares (97 square miles) of forests were burning in Russia, according to the Russian Federal Forestry Agency. Most of the fires—uncontrolled wildfires in boreal forests—were in central and eastern Siberia, as shown in this image acquired on July 10 by NASA’s Aqua satellite.

Fires had engulfed 10,500 hectares in Krasnoyarsk, 6,300 hectares in Tomsk and 2,400 hectares in Yakutia. Yugra, Sakhalin and Khabarovsk also had large fires burning. In the image at left, thick smoke billowed from numerous wildfires near the Aldan River and blew to the north. Red outlines indicate hot spots where the Aqua satellite detected unusually warm surface temperatures associated with fires.

On July 6, NASA Goddard Space Flight scientist Jon Ranson, who is in the midst of a field expedition in Siberia, observed the fires firsthand during a flight between St. Petersburg and Krasnoyarsk. He described the scene on the blog he’s using to chronicle the expedition.

“We left St. Petersburg near sunset, with the sun low on the horizon. Smoky sunsets create very red skies, and the colors were pretty spectacular. It reminded me of the sunsets I saw just a few weeks ago when I visited Greely, Colo. I was close to the High Park Fire, and the sky was an amazing, blazing orange at sunset. That was only one fire, however. Dozens, or maybe hundreds, colored the sky on July 6 as we passed above the smoke. We flew over a huge, curving river of thick smoke. It truly looked like a river flowing, I think, generally north to south.”