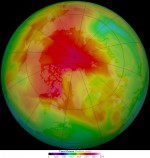 Although Earth’s ozone layer has been depleted during the last four decades by chlorofluorocarbons (CFCs) and similar chemical compounds, the changes are expressed differently at the North and South Poles. While a large ozone hole forms consistently each year over Antarctica, the concentration of Arctic ozone is much more variable. Why such differences?