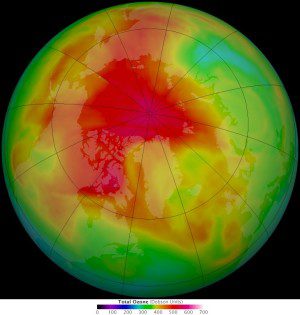 This map shows the concentration of stratospheric ozone over the Arctic”63 to 90 degrees north”on April 1, 2014. Ozone is typically measured in Dobson Units, the number of molecules required to create a layer of pure ozone 0.01 millimeters thick at a temperature of 0 degrees Celsius and an air pressure of 1 atmosphere”the pressure at Earth's surface.

Although Earth's ozone layer has been depleted during the last four decades by chlorofluorocarbons (CFCs) and similar chemical compounds, the changes are expressed differently at the North and South Poles. While a large ozone hole forms consistently each year over Antarctica, the concentration of Arctic ozone is much more variable. Why such differences?

The differences occur because the weather patterns at the two poles are different. In the far south, the ice-covered continent of Antarctica is surrounded by an ocean. Winds circle the continent in a potent eddy-like band”a polar vortex”that promotes the formation of cold air masses and prevents atmospheric mixing with middle latitudes.

Ozone depletion is depends on the formation of polar stratospheric clouds, which accumulate chlorine and bromine compounds in the cold polar night and then release these ozone-eaters when the sunlight of spring returns.

The North Pole, however, is an ocean surrounded by land that is irregular in shape and altitude. This leads to more atmospheric waves and uneven wind patterns that mix the air more between middle and high latitudes and among different atmospheric layers.

This changes the amount of ozone-depleting substances delivered to and from the Arctic as well as makes temperatures more variable. And while polar vortices do form in the Arctic, they don't last as long or stay as stationary as their southern counterparts.