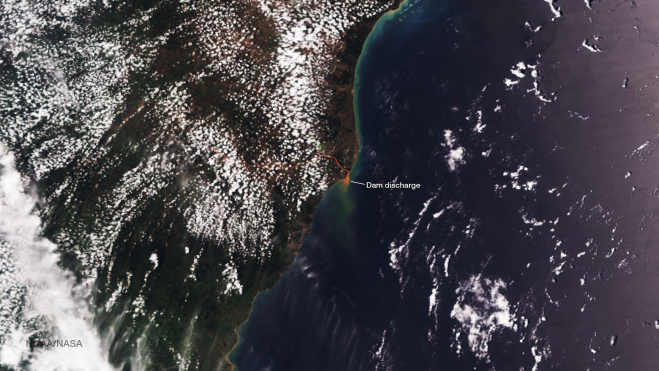 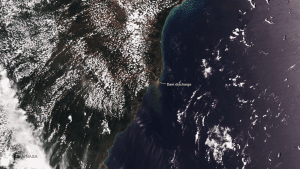 This image was created using a combination of high- and moderate-resolution bands from the Joint Polar Satellite System to create a pseudo-true-color image from Dec. 14, 2015. Red-colored water can be seen as it snakes its way along the Rio Doce toward the ocean. Also visible along the coast are naturally occurring sediments and phytoplankton plumes. (Credit: NOAA)

On Nov. 5, 2015, an iron-ore tailings dam in Bento Rodrigues, a subdistrict of Mariana, Brazil, suffered a catastrophic failure, causing flooding and at least 13 deaths.

About 60 million cubic meters of iron waste entered the Doce River, and toxic brown mudflows reached the Atlantic Ocean 17 days later. Although the total impact and environmental consequences to the river and its wildlife are currently unknown, the incident has been described as the worst environmental disaster in Brazil’s history.

The dam is a property of Samarco, a joint venture between Vale and BHP Billiton. Samarco has already been sentenced $265 million in compensation fines due to the disaster.