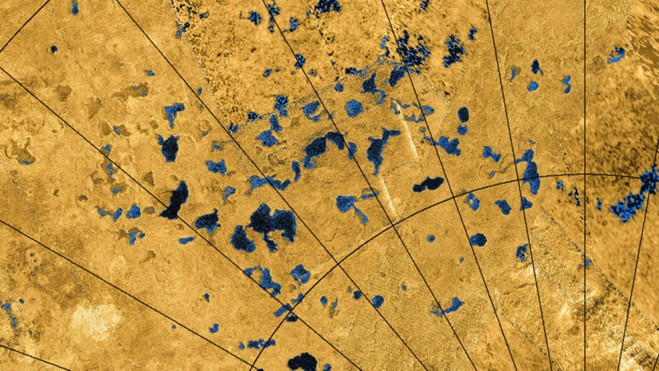 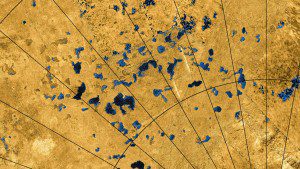 Radar images from NASA’s Cassini spacecraft reveal many lakes on Titan’s surface, some filled with liquid and some appearing as empty depressions.

Saturn’s moon Titan is home to seas and lakes filled with liquid hydrocarbons, but what forms the depressions on the surface? A new study using data from the joint NASA and European Space Agency (ESA) Cassini mission suggests the moon’s surface dissolves in a process similar to the creation of sinkholes on Earth.

Apart from Earth, Titan is the only body in the solar system known to possess surface lakes and seas, which have been observed by the Cassini spacecraft. But at Titan’s frigid surface temperatures—roughly minus 292 degrees Fahrenheit (minus 180 degrees Celsius)—liquid methane and ethane, rather than water, dominate Titan’s hydrocarbon equivalent of Earth’s water.

Cassini has identified two forms of methane- and ethane-filled depressions that create distinctive features near Titan’s poles. There are vast seas several hundred miles (or kilometers) across and up to several hundred feet (or meters) deep, fed by branching, river-like channels. There also are numerous smaller, shallower lakes, with rounded edges and steep walls that are generally found in flat areas. Cassini also has observed many empty depressions.

The lakes are generally not associated with rivers, and are thought to fill up by rainfall and liquids feeding them from underground. Some of the lakes fill and dry out again during the 30-year seasonal cycle on Saturn and Titan. But exactly how the depressions hosting the lakes came about in the first place is poorly understood.