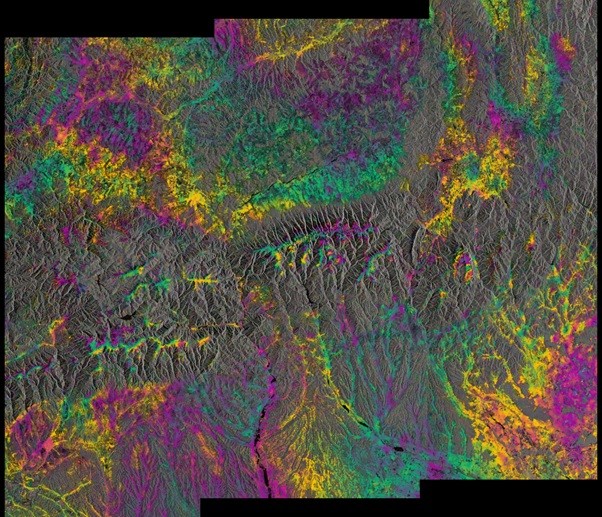 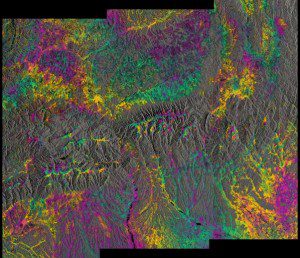 This ‘interferogram’ combines a Sentinel-1A radar scan from June 9, 2016, over southern Romania with a Sentinel-1B acquisition from June 15, 2016, over the same area. Bucharest is near the lower right corner, and the color pattern is related to local terrain topography. (Credit: Contains modified Copernicus Sentinel data (2016)/ESA/Norut)

The twin Sentinel-1A and 1B satellites, orbiting 180-degrees apart at an altitude of almost 700 kilometers, provided their first combined radar image, demonstrating a capability to reveal small deformations in Earth’s surface.

The two-satellite ‘radar vision’ is particularly useful for generating accurate maps of surface deformation over wide areas, such as those caused by tectonic processes, volcanic activities or landslides. It is also ideal for monitoring glacier flow and changes in Arctic and Antarctic ice shelves.

The images’ rainbow-colored patterns are related to topography, and they demonstrate that the two satellites’ identical radars are accurately synchronised, pointing in the same direction, and that the satellites are in their correct orbits.