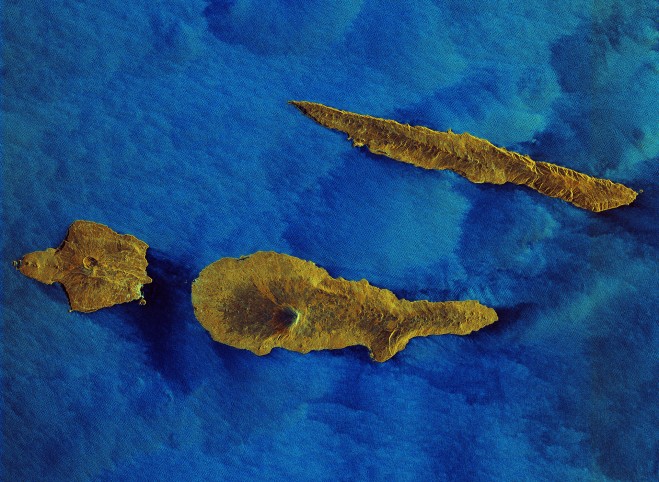 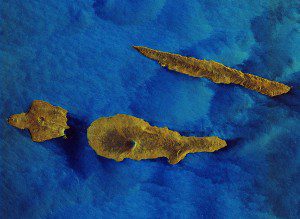 A Sentinel-1A radar image of the Azore islands west of Portugal was processed to depict water in blue and land in earthen colors. (Credit: Copernicus Sentinel data (2015)/ESA)

This Sentinel-1A radar image features some of the Azore islands about 1,600 kilometers west of Lisbon, including the turtle-shaped Faial, the dagger-like Sao Jorge and Pico Island, with Mount Pico reaching more than 2,351 meters in height.

Faial is part of the central group of the Azores. It has some 15,000 inhabitants and its main municipal seat is the city of Horta. Different shades of blue decorate the houses, which divide the fields and line the roads, giving Faial the name “Blue Island.” In 1957, an eruption about 1 kilometer from the coast ejected large quantities of lava and ash, forming an islet that later became connected to Faial island by an isthmus.

Unique among the islands of Azores, São Jorge is long and slender, and therefore susceptible to ocean erosion. And named after its imposing mountain, Pico Island’s history was forged on whaling and wines.