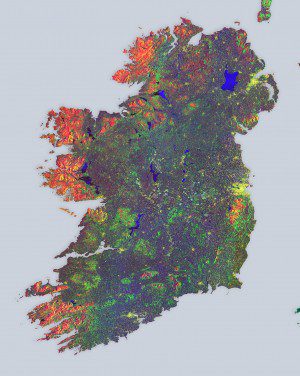 This land-cover image was stitched together from 16 radar scans from the Sentinel-1A satellite. Blues represent strong changes in bodies of water or agricultural activities such as ploughing. Yellows represent urban centers, with the capital city of Dublin distinct on the far middle right. (Credit: Contains modified Copernicus Sentinel data [2015], processed by ESA)

As seen in the image, the coastal mountain fringes in the west, northwest and east are composed mainly of granite, while old red sandstone predominates in the south. Many lakes, large bog areas and low ridges make up the scenic lowland.

An interesting feature is the many yellow spots scattered throughout the island, which represent farmhouses. Vegetated fields and forests appear in green, and reds and oranges represent unchanging features such as bare soil or possibly rocks that border the forests.