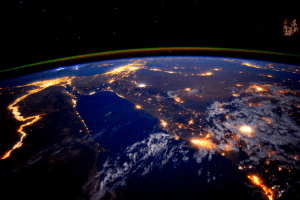 NASA Astronaut Scott Kelly captured this nighttime image of the Persian Gulf and Nile River, which empties into the Mediterranean amid the bright lights of Cairo and the Nile Delta. (Credit: NASA)

Having reached the halfway mark of his latest one-year mission and overall logging a record-breaking time in space approaching 400 days, U.S. astronaut and commander of the current Expedition 45 crew Scott Kelly has been dazzling audiences with beautiful pictures taken from beyond Earth's atmosphere. He recently photographed the Nile River during a nighttime flyover on Sept. 22, 2015.

The Nile is the longest river in the world at 6,650 kilometers (4,132 miles). Although typically associated with Egypt, the river also flows through Burundi, Ethiopia, Sudan and Uganda, providing water to more than 300 million people.