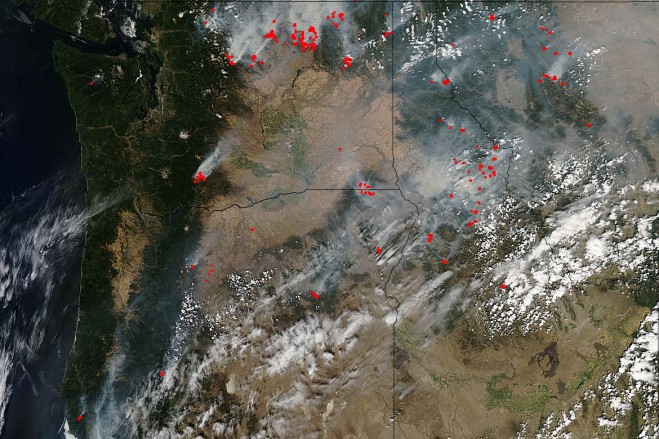 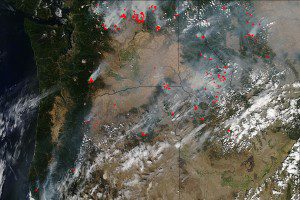 The Pacific Northwest is abundantly dotted with wildfires in Washington, Oregon, Idaho and Montana, and satellite imagery from a variety of sensors is being used extensively to monitor the situation.

There are more than 27 fires listed in the Inciweb database for the state of Washington. The largest active fire listed is the Okanogan Complex Fire, which is currently at 256,567 acres and has 1,250 personnel working the fire. This fire began as a lightning strike on Aug. 15, 2015, and it’s only 10 percent contained at present. Washington state has lost the most firefighters this season, with the deaths of three U.S. Forest Service firefighters on August 19 as they were battling the Okanogan Complex Fire.

Idaho also is feeling the heat with more than 40 active fires listed in the Inciweb database. The largest fire, the Soda Fire, is 100 percent contained, but it has affected 283,686 acres.

Montana hasn’t been spared the wildfire plague, but currently there are “only” 26 fires listed, with the largest being Bear Creek Fire at 20,460 acres.

In Oregon, it’s much the same story with 19 ongoing fires torching parts of the state. The largest of these as listed in Inciweb is the Cornet-Windy Ridge Fire, which is currently 80 percent contained.