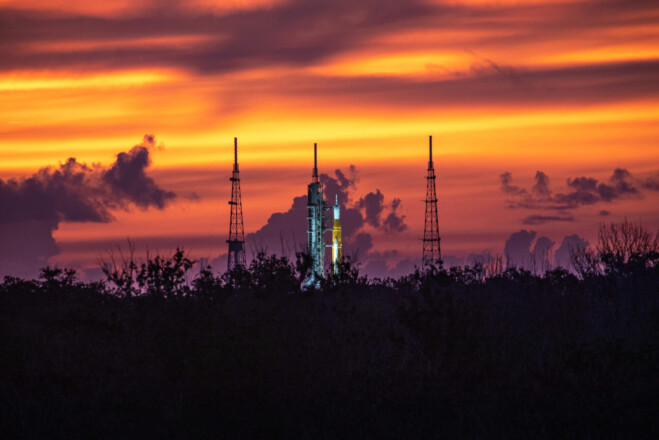 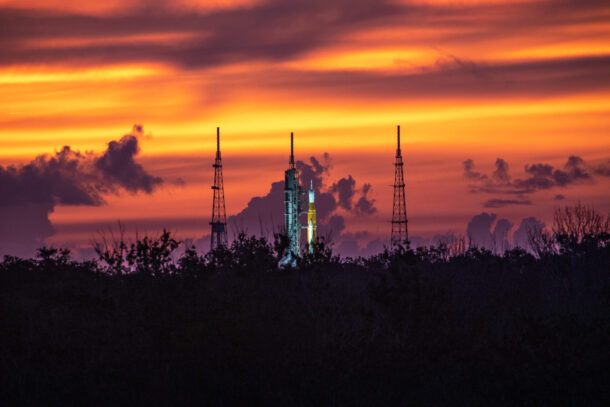 A golden sunrise surrounds NASA’s Space Launch System and Orion spacecraft for Artemis I on the pad at Launch Complex 39B at NASA’s Kennedy Space Center in Florida on Aug. 22, 2022. Launch of Artemis I is scheduled for no earlier than Aug. 29, 2022, at 8:33 a.m. EDT. The first in a series of increasingly complex missions, Artemis I will provide a foundation for human deep space exploration and demonstrate our commitment and capability to extend human presence to the Moon and beyond. The primary goal of Artemis I is to thoroughly test the integrated systems before crewed missions by operating the spacecraft in a deep space environment, testing Orion’s heat shield, and recovering the crew module after reentry, descent, and splashdown.

The Orion spacecraft with integrated European Service Module sits atop the Space Launch System, imaged at sunrise at historic Launchpad 39B at Kennedy Space Center in Florida.

The Flight Readiness Review has deemed the trio GO for launch, marking the dawn of a new era in space exploration.

The first in a series of missions that will return humans to the Moon, including taking the first European, Artemis I is scheduled for launch no earlier than Aug. 29, 2022.

This mission will put NASA’s Orion spacecraft and ESA’s European Service Module to the test during a journey beyond the Moon and back. No crew will be on board Orion this time, and the spacecraft will be controlled by teams on Earth.

The crew module, however, won’t be empty. Two mannequins, named Helga and Zohar, will occupy the passenger seats. Their female-shaped plastic bodies are filled with more than 5,600 sensors each to measure the radiation load during their trip around the Moon. The specially trained wooly astronaut, Shaun the Sheep, has also been assigned a seat.

The spacecraft will enter lunar orbit using the Moon’s gravity to gain speed and propel itself almost half a million kilometers from Earth—farther than any human-rated spacecraft has ever traveled.

The second Artemis mission will see four astronauts travel around the Moon on a flyby voyage around our natural satellite.