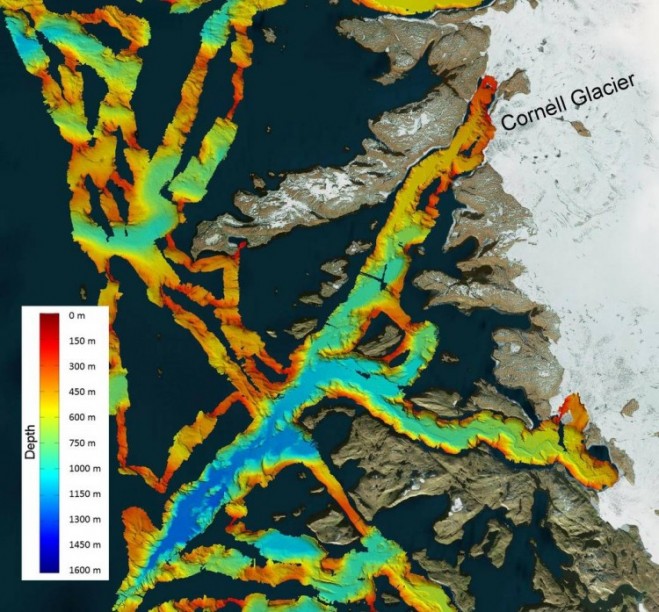 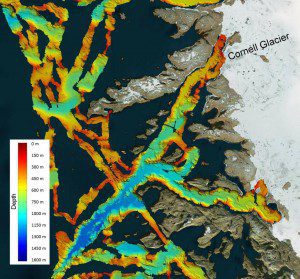 An image shows a region of the seafloor off the coast of northwest Greenland mapped as part of NASA’s OMG mission, with deep-blue colors representing depths of more than 1,000 meters. A deep trench extends to the south and west of the Cornell Glacier, shown in the upper right-hand corner. (Credit: NASA/JPL-Caltech)

NASA’s Oceans Melting Greenland (OMG) field campaign is gathering data that will help scientists understand how the oceans are joining with the atmosphere to melt the vast ice sheet as well as predict the extent and timing of the resulting sea-level rise. OMG scientists will observe changing water temperatures and glaciers that reach the ocean around all of Greenland from 2015-2020.

“A lot of the major uncertainty in future sea-level rise is in the Greenland Ice Sheet,” said OMG principal investigator Josh Willis, a scientist at NASA’s Jet Propulsion Laboratory.

At about 660,000 square miles (1.7 million square kilometers), the Greenland Ice Sheet is three times the size of Texas. It’s about a mile deep on average and contains enough water to raise global sea levels about 20 feet (six meters), if it were all to melt.