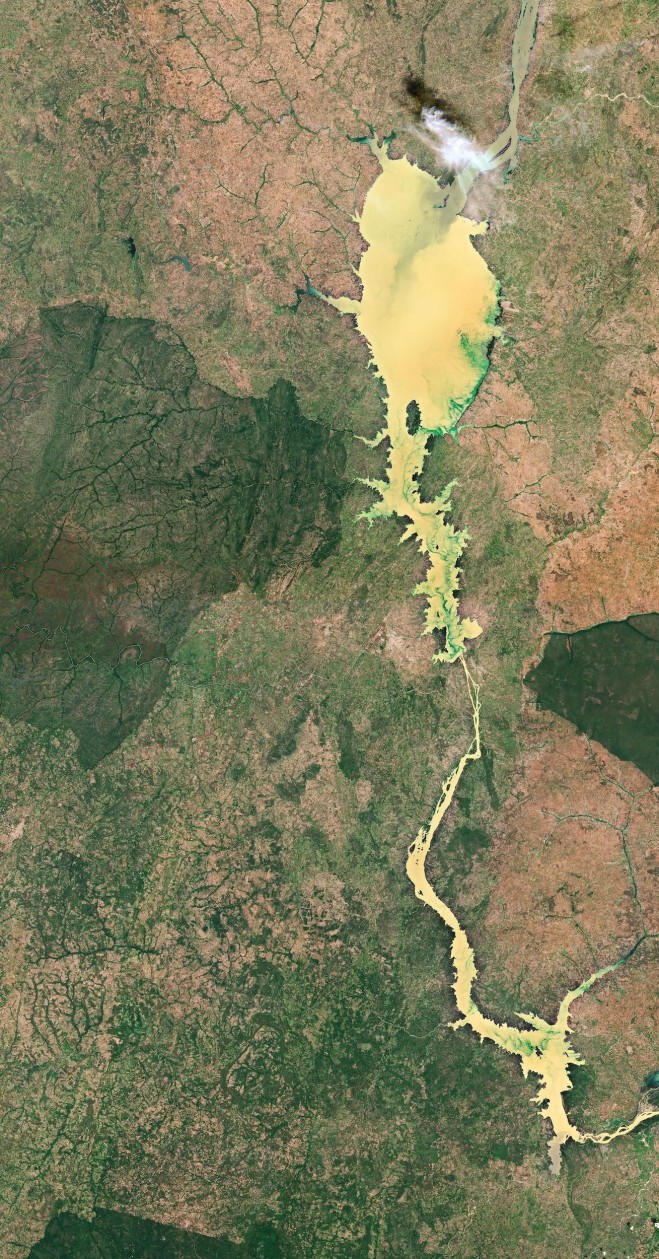 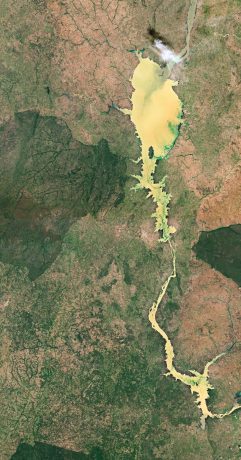 Kainji Lake, a reservoir on the Niger River in western Nigeria, is featured in this true-color image captured by the Copernicus Sentinel-2 mission. Kainji Lake was created in 1968 by the construction of the Kainji Dam and covers an area of around 1,300 square kilometers with a mean depth of 12 meters. Water from the Niger River, the third-longest river in Africa, enters the lake in the north. The grey-colored waters here mix with the striking, yellow-colored waters of Kainji Lake, creating a distinct sediment plume moving southwards. The emerald-green streaks are vegetation and algae floating on the surface of the lake.

The creation of the lake submerged Foge Island, the town of Bussa and permanently flooded other riverine settlements, leaving around 50,000 people displaced. Foge Island can be seen dividing the river into two channels at the northern end, and the channels merge again north of Old Bussa. During low water tides, large parts of Foge Island rise above and are temporarily inhabited by migrating fishermen.

Kainji Dam, located in the centre of the image, produces electricity for most of Nigeria’s cities. The dam is the largest of the dams on the Niger, over 66 meters high and 550 meters across. The dam provides electrical power, improved river navigation and water control of the Niger as well as waters for irrigation and fishing.

Kainji Lake National Park, visible as a dark green patch of land in the left of the image, is Nigeria’s oldest national park. Covering an area of around 5,300 square kilometers, the park contains three distinct areas: a part of the Kainji Lake, the Borgu Game Reserve to the west of the lake, and the Zugurma Game Reserve to the southeast. Around 65 mammal species, 350 species of birds and 30 species of reptiles and amphibians have been recorded in the park.