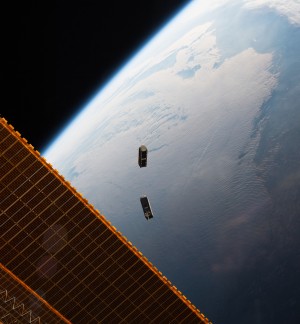 Two Dove satellites built and operated by Planet Labs were set into space via the NanoRacks CubeSat Deployer aboard the International Space Station. (Credit: NASA)

Unlike traditional satellite missions that carry a significant number of custom-built, state-of-the-art instruments, CubeSats are designed to take narrowly targeted scientific observations, with only a few instruments, often built from off-the-shelf components. The Planet Labs satellites, now with more than 100 in space, fit the CubeSat 3U form factor of 10 by 10 by 30 centimeters and weigh approximately four kilograms.