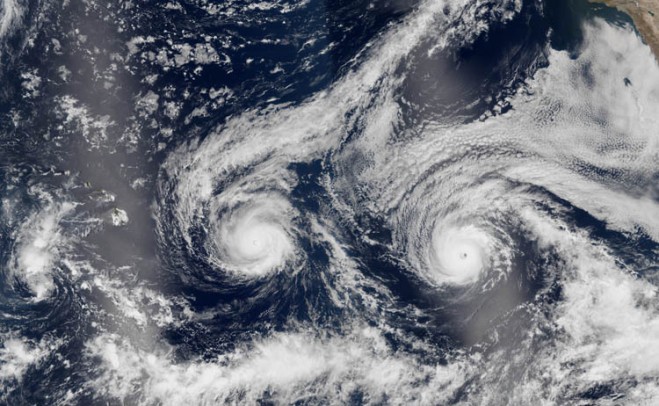 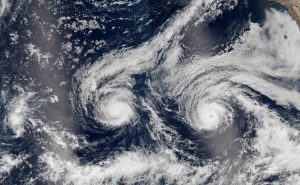 This natural-color image is a composite built from two overpasses by the Visible Infrared Imaging Radiometer Suite (VIIRS) on the Suomi NPP satellite on Aug. 29, 2016. At the time, Hurricane Madeline and Hurricane Lester were hovering between category 3 and 4 storms. (Credit: NASA Earth Observatory image by Jesse Allen, using VIIRS data from the Suomi National Polar-orbiting Partnership )

On Aug. 30, forecasters were predicting that Hurricane Madeline would pass just south of Hawaii as a category 1 storm in the evening on August 31.

“This track will take the center of Madeline dangerously close to the Big Island of Hawaii late Wednesday and Thursday,” wrote the forecasters at the Central Pacific Hurricane Center. “Given its close approach and uncertainty in the track forecast, a Hurricane Warning has been issued for the Big Island.”

Fortunately, Madeline tracked further south. The storm affected the area with heavy rainfall, high surf and strong winds up to 60 mph on the Big Island, with some power losses as a result. Lester pulled well away from the Hawaiian Islands, coming no closer than 130 miles from Honolulu on Sept. 3.

No hurricane has made landfall on the Big Island since recordkeeping started in 1949.