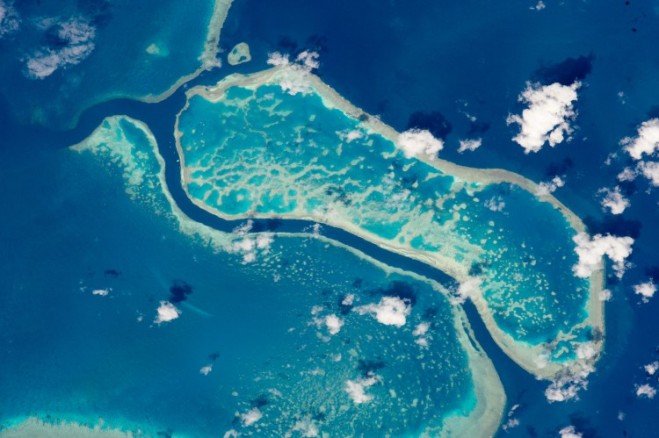 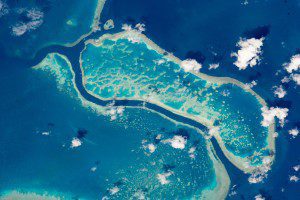 This photograph was acquired on Oct. 12, 2015, by a member of the International Space Station Expedition 45 crew. The image has been cropped and enhanced to improve contrast, and lens artifacts have been removed. (Credit: NASA)

An astronaut aboard the International Space Station used a powerful lens to photograph these three reefs in Australia’s Great Barrier Reef. The area spans about 15 kilometers of the 2,300-kilometer reef system. Reefs are easy to spot from space because the iridescent blues of shallow lagoons contrast sharply with the dark blues of deep water.

The Great Barrier Reef is the largest reef system on Earth, with more than 3,000 separate reefs and coral cays. It is also one of the most complex natural ecosystems, with 600 types of corals and thousands of animal species from tiny plankton to whales.

Corals look like plants, but are in fact colonies of very small animals known as coral polyps—closely related to jellyfish. The color differences in the photo relate to different habitats for coral growth.