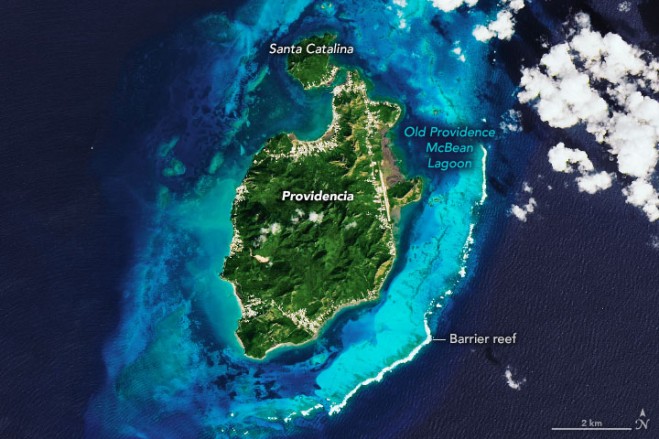 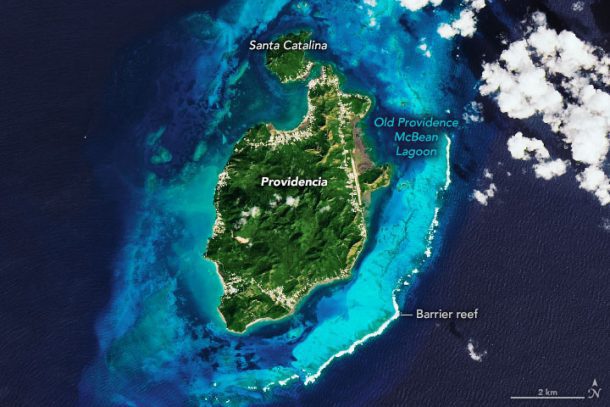 Situated in the southwestern Caribbean Sea, Providencia was once an island sanctuary for pilgrims and privateers. Today, it is mostly a refuge of quieter Caribbean life amid raw natural beauty. The Operational Land Imager-2 (OLI-2) on Landsat 9 acquired this image of it on Jan. 9, 2022.

Providencia is officially a territory of Colombia, though it sits closer to the Nicaraguan coast. Spanning about 17 square kilometers (7 square miles), the island is part of the San Andres archipelago; a small footbridge connects neighboring Santa Catalina Island. The island is one of the centerpieces of the Seaflower Biosphere Reserve, a UNESCO Marine Protected Area noted for its marine biodiversity. The peaks at the center of the island are remnants of an ancient volcano.

Not much has been written about the indigenous history of the island, but Europeans arrived around the start of the 17th century. Dutch pirates were the first of many generations of privateers to use the island as a safe harbor and launching point for raids on Central America and the Caribbean Islands. In 1631, English pilgrims arrived on the Seaflower (a sister ship to the Mayflower) with hopes for more agricultural success than their fellows to the north in Plymouth, Mass.

But it was not long before the island was also forcibly populated with indentured servants and slaves. It also wasn’t long before Providencia became the site of one of the first known slave rebellions in a British colony. Eventually, control of the island was taken by the Spanish, and then again by pirates such as Henry Morgan. Today, the island is populated by about 5,000 people scattered among seven main villages, with the economy driven by fishing, farming and limited tourism.

The volcanic island is surrounded by reefs, and the varying water depths nearby have led some people to call the surrounding area the “sea of seven colors.” Old Providence McBean Lagoon is the centerpiece of a national nature park with tropical dry forests and mangroves onshore, and coral reefs, cays and lagoons offshore. More than 150 bird species have been reported in the park, including frigate birds. Between April and June, the island pauses for a vast migration of black land crabs (Gecarcinus ruricola), which march down from the central hills toward the sea to lay their eggs.

Late in 2020, Providencia was severely damaged by category 5 Hurricane Iota, an intense storm that wiped out most of the island’s homes and infrastructure. By November 2021, about half of the homes had been rebulit, and local leaders were hoping to re-open the island to tourism sometime in 2022.