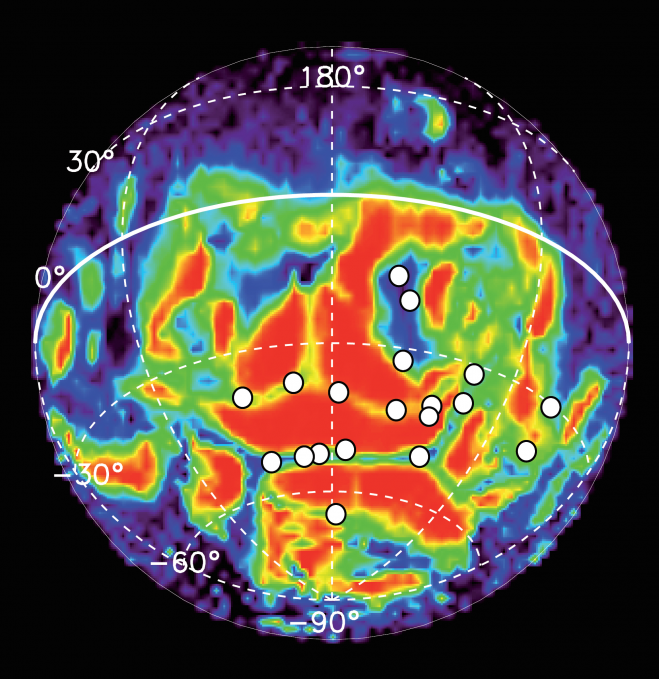 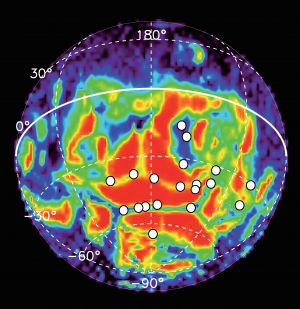 An image shows the locations of 19 auroral detections (white circles) made by the SPICAM instrument on Mars Express during 113 nightside orbits between 2004-2014. (Credit: Based on data from J-C. Gérard et al (2015))

The European Space Agency’s Mars Express satellite has been able to detect ultraviolet auroras on the planet by combining remote observations with in situ measurements of electrons hitting the atmosphere, and a new study looks at 10 years of such observations.

On Earth, auroras at high northern and southern polar latitudes arise as the solar wind interacts with Earth’s magnetic field, but these light displays can occur on planets with no magnetic field, such as Venus and Mars, when solar particles strike the planet’s atmosphere.

According to the new research, Mars’ auroral emissions are short-lived, not seen to repeat in the same location, and only occur near the boundary between open and closed magnetic field lines.

“With 10 years of data, we’ve gone much further than the initial detection, and we now have a better understanding of the characteristics and occurrences of this interesting phenomenon,” says Jean-Claude Gérard of the University of Liège, Belgium, lead author of the paper published in the Journal of Geophysical Research: Space Physics.