Starting in 2004, the NASA Goddard Earth Sciences Data and Information Services Center (GES DISC) has provided an innovative and useful way to look at NASA Earth science data using the Web. The Geospatial Interactive Online Visualization and Analysis Infrastructure (Giovanni) provides a simple interface that allows the rapid generation of data maps, time-series plots, comparison diagrams, and other analytical displays that allow scientists and professionals to investigate data suited to their particular research and investigative needs.

Although researchers frequently access the system (it has been used in more than 1,000 science journal papers and is frequently cited in meeting presentations, theses and dissertations, reports, and online media), for many years the output was difficult to use by the GIS community.

GES DISC developers recently augmented the most-recent version, Giovanni-4, to better serve GIS users. These features comprise regional input selections and GIS-compatible image formats. Due to common requests from the GIS community, Giovanni-4 added the GeoTIFF image-format output. (Other options for image formats are PNG and KMZ; one of the first features added to the system specifically for the geospatial data community was the KMZ format option, enabling the integration of Giovanni data maps with Google Earth.)

Giovanni-4, as with its predecessors, allows users to select a customized region for analysis in two different ways:

An accompanying image shows a Shapefile using model data from the North American Land Data Assimilation System (NLDAS), a set of hydrological models that use data from NASA satellite sensors and other data sources. The NLDAS data parameter shown in the display is soil moisture for the topmost meter of ground surface. One of Giovanni’s strengths is rapid averaging of data files, which is illustrated here by showing the soil moisture average for the months of May, June and July 2015 in California. 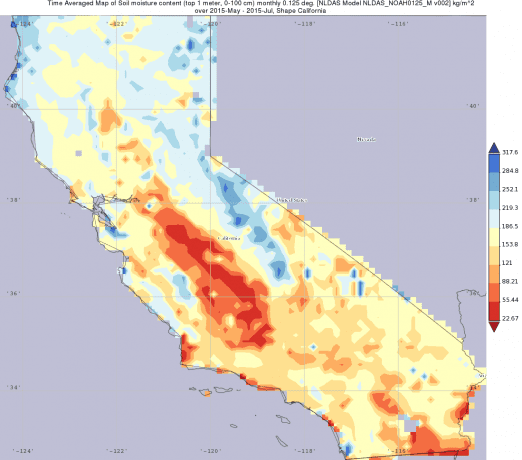 A Giovanni image uses a Shapefile for California to show averaged soil-moisture content in the top meter of the ground surface for May-July 2015.

In addition to these new Giovanni options, the GES DISC also provides expert assistance to GIS users who access NASA data. The GES DISC created several data recipes demonstrating how to convert NASA data from its native format to formats more useful to GIS applications and software. These recipes provide step-by-step techniques using data from the GES DISC in combination with other tools, such as Giovanni or the NASA data-processing software package Panoply.

The Giovanni system provides access to many different data parameters that are likely to be of interest to GIS users. The hydrological community can access precipitation data (including data from the recently launched Global Precipitation Measurement mission), many different variables from NLDAS models and vegetation cover. Meteorologists and climate scientists may be interested in precipitation, cloud properties, surface temperature, radiation and heat flux. Public-health professionals can use data related to air quality (such as ozone, nitrogen dioxide and aerosol optical thickness) as well as variables related to disease vectors, which include soil moisture, humidity and rainfall amounts. Giovanni also has been used in educational settings to observe changes in climate-related variables such as snow and ice cover, surface temperature, and spring runoff.

The GES DISC invites GIS users to try out the system at giovanni.gsfc.nasa.gov, and provide feedback on other features and capabilities that could help the geospatial data-analysis community.