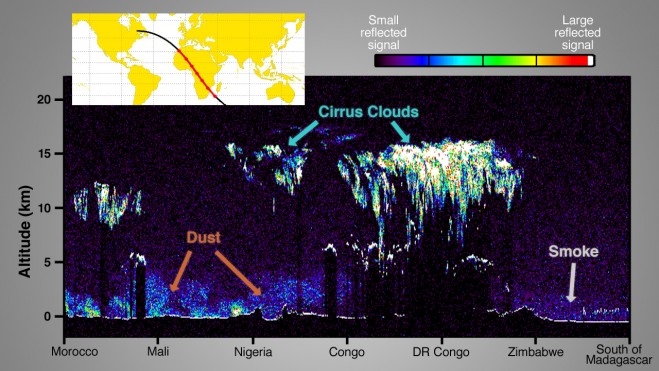 Four new NASA Earth-observing missions are collecting data from space—with a fifth newly in orbit—after the busiest year of NASA Earth science launches in more than a decade. 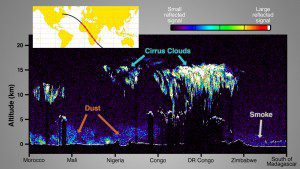 From Saharan dust storms to icy clouds to smoke on the opposite side of the continent, the first image from CATS, NASA’s newest cloud- and aerosol-measuring instrument, provided a profile of the atmosphere above Africa.

“This has been a phenomenally productive year for NASA in our mission to explore our complex planet from the unique vantage point of space,” said John Grunsfeld, NASA associate administrator of the Science Mission Directorate. “Combined with data from our other Earth-observing spacecraft, these new missions will give us new insights into how Earth works as a system.”

With these missions, including two instruments mounted on the exterior of the International Space Station, NASA now has 20 Earth-observing space missions in operation. Observations from these missions, like all NASA data, will be free to the international scientific community and decision makers in the United States and abroad.

“The highly accurate measurements from these new missions will help scientists around the world tackle some of the biggest questions about how our planet is changing,” said Peg Luce, NASA deputy director of the Earth Science Division. “These new capabilities will also be put to work to help improve lives here on Earth and support informed decision-making by citizens and communities.”

Earlier this year, NASA released the agency’s most comprehensive global rain and snowfall product to date from the GPM mission made with data from a network of 12 international satellites, including the GPM Core Observatory. The Core Observatory acts as a “tuner” to bring together measurements of other satellites, providing a nearly global picture of rain and snow called the Integrated Multi-satellite Retrievals for GPM (IMERG) product. The first global visualization of the initial IMERG data can be downloaded from NASA’s Scientific Visualization Studio at http://svs.gsfc.nasa.gov/goto?11784.

“The IMERG data give us an unprecedented view of global precipitation every 30 minutes,” said Gail Skofronick-Jackson, NASA’s Goddard Space Flight Center (GSFC) GPM project scientist. “Knowing where, when, and how much it rains and snows is vital to understanding Earth’s water cycle.”

The Orbiting Carbon Observatory-2 (OCO-2), launched on July 2, 2014, is providing preliminary global maps of carbon dioxide concentrations and a related phenomenon known as solar-induced chlorophyll fluorescence. OCO-2 data will let scientists better understand how carbon dioxide is distributed around the globe and changes with the seasons. The data will be used to identify the sources and storage places, or sinks, of carbon dioxide—the most significant human-produced greenhouse gas driving global climate change.

In addition to these two free-flying satellite missions, NASA deployed two Earth-observing instruments to the International Space Station (ISS): ISS-RapidScat, a scatterometer that measures wind speeds and direction over the ocean, and the Cloud-Aerosol Transport System (CATS), a light detection and ranging (LiDAR) instrument that measures the altitude of clouds and airborne particles.

Launched Sept. 21, 2014, ISS-RapidScat’s ocean wind measurements continue observations made by the agency’s Quick Scatterometer (QuikSCAT) satellite. These measurements already are being used in weather forecast models used by the U.S. Navy, the National Oceanic and Atmospheric Administration, and by European and Indian scientists. The ISS-RapidScat team also uses the wind measurements to better understand how ocean winds differ, on average, during the day and night.

CATS was launched to ISS on Jan. 10, 2015, and released its first data image—a slice of the atmosphere over Africa, showing clouds and dust particles—on Feb. 11. Clouds and aerosols remain two of the biggest question marks in terms of impact on future potential climate change. CATS was built by a team at GSFC as a way to demonstrate new LiDAR technology capable of accurate cloud and aerosol measurements, according to Matt McGill, GSFC CATS principal investigator.

NASA’s newest Earth-observing satellite, the Soil Moisture Active Passive (SMAP), was launched Jan. 31, 2015, to begin its mission to map global soil moisture and detect whether soils are frozen or thawed. Currently in its checkout phase, the observatory completed a key milestone on Feb. 24 with the deployment of its 20-foot-wide (6-meter) reflector antenna, which rotates at approximately 15 revolutions per minute. The antenna produces a 620-mile-wide (1,000-kilometer) measurement swath, mapping the entire globe every two to three days.

Video and images of the new NASA data products discussed in this column are available online at http://go.nasa.gov/newearthviews. For more information about NASA’s Earth science activities, visit www.nasa.gov/earthrightnow.