Coastal Monitoring Provides an Opportunity for Oil and Gas Projects

Deepwater Horizon”the memories are fading, but the negative effects still are being felt six years later and will be for a while to come. Much has been said about the impacts on the wildlife, coastal ecosystems, fisheries, tourism and other parts of the local environment and economy.

A lot also has been done in the oil industry to improve good practice for oil-spill response, but somewhat lacking is the drive for preparedness for any new event. The current drop in the price of oil and subsequent revenue losses also have discouraged oil and gas companies from increasing any of these efforts”spending money on extracurricular activities not prescribed by the respective regulator.

The opportunity lies in the oil and gas industry collaborating and jointly developing baseline mapping and subsequent monitoring methodologies using as much Earth-observation (EO) data and technology as required to reach a fundamentally improved knowledge of the coastal zones worldwide that could be affected by an oil-spill disaster. By working together, common guidelines can be established, common analysis methods and reporting developed, and common data acquisition strategies generated. In addition, a common voice to the regulator will ensure the acceptance of these new methodologies based on EO. 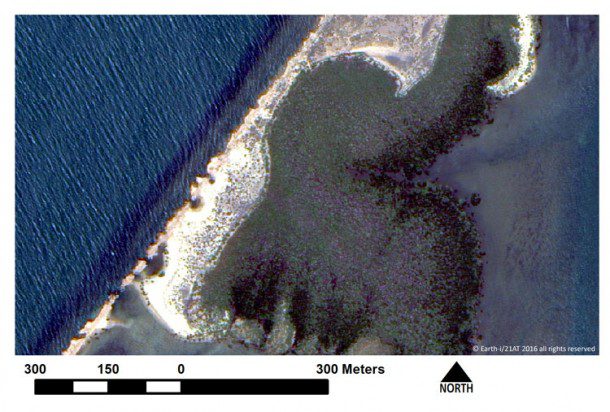 A satellite image taken recently by Earth-i’s high-resolution DMC3 constellation shows recent examples of mangrove coverage on the northwest coastline of Australia, close to some large oil and gas fields. Spatial detail such as individual trees, coastal damage, debris fields, contaminated areas, access tracks and shallow-water obstacles can be identified. Such detailed information would be useful for preparedness and response teams in case of any incident.

A new disaster similar to Deepwater Horizon will hurt the entire oil and gas industry and not just the individual company unfortunate enough to operate the failed asset. From a company point of view, it makes sense to form a Joint Industry Project (JIP) to address the coastal mapping and monitoring needs required by each company, where the costs are shared according to their stakes in exploration and production.

Most oil and gas development projects these days are operated as joint ventures, with two, three or even six participating companies reducing the risk. Why not share the efforts required for any incident and work together in JIPs, involving EO service providers as well as research and development organizations to allow for state of the art data to be used and analyzed on a regular basis?

The European Sentinel program, for example, is providing its datasets for free, and so is the U.S. Landsat mission. These are excellent sources of regular, free data at medium spatial resolution, ideal for timeline-monitoring programs, be it on a monthly, quarterly or yearly basis. In combination with high-spatial-resolution baseline data for the initial mapping initiative, they provide an excellent opportunity to use EO methods at a manageable budget. Only if material change is detected, any sudden events require it or if a new baseline is needed, will new high-resolution data be necessary.

Why Focus on Coastal Zones?

Coastal zones are the most-vulnerable ecosystems affected by any offshore oil and gas incident, even if it can't immediately be defined as a disaster. The slightest oil contamination, such as on a coastline with mangroves, will dramatically affect such an ecosystem.

Coastal areas are the nurseries of the majority of marine life on Earth, be they turtle nesting beaches, coral reefs or flat-water estuaries. In light of a new incident, we need to have the best-possible baseline maps and monitoring methods in place to minimize any potential impact on these sensitive areas.

Coastal zones, however, also can be affected by other impacts, such as storms, tidal surges or man-made interventions. The oil and gas industry would benefit from having good baseline data to avoid the blame for environmental impacts they didn't cause in the first place.