Coastal erosion is a persistent problem along the California coast that can drastically affect local communities. In the last 20 years alone, erosion has taken a particularly high toll in Pacifica, Calif. Through wind, rain and wave action, the scenic bluffs that line the ocean in this beachside town have continued to retreat to a point where local homes have been evacuated and condemned for demolition. In 1998, at least seven homes were removed as the ground beneath them threatened to collapse. In recent months, an apartment complex has been slated for the same fate, as El NiÃ±o-driven storms increase the retreat of the cliff toward the structures. A visualization shows the volume of material eroded from the California coast near Esplanade Ave. between 1998-2010. The estimated volume is approximately 200,000 cubic yards.

Light detection and ranging (LiDAR) can be used to evaluate the amount of erosion in a particular region by measuring the time it takes for light emitted from a sensor to be reflected back from objects in its path. Coupled with GPS technology, it helps create a highly accurate 3D model of the world in the form of points clouds.

LiDAR scans can be generated from the ground or using aerial vehicles, and unmanned aerial systems (UASs), or drones, also can generate 3D models through photogrammetry. With datasets from multiple time periods, change-detection analyses may be performed to identify differences in a region between acquisitions.

To evaluate the co-registration of the datasets, 25 checkpoints in specific locations away from the coast were chosen on hard-packed surfaces, including 20 points on paved roads as well as five points on rooftops. The percent difference in elevation was calculated to be less than 1 percent for all points. The edges of ground-based features and buildings also were found to match closely horizontally.

To estimate the amount of erosion that occurred in the 12-year period between LiDAR datasets, a change-detection analysis was performed. A bare-earth digital elevation model was generated for 1998 and 2010, and the retreat in the edge of the bluffs along several profile lines was measured. The maximum retreat in this area ranged from 60-80 feet or more, and the estimated volume of eroded material was approximately 200,000 cubic yards.

These estimates only pertain to soil lost in this particular region. Existing, multi-epoch LiDAR datasets extend for the length of California and could be used to document how much sediment is being lost along the coast statewide. In addition, with the increasing viability of UASs in survey applications by qualified and FAA-approved users, the feasibility of more-focused studies on the most erosion-prone areas is increasing rapidly.

LiDAR and UAS technology, given their innate ability to convey accurate 3D models, are an indispensable means of estimating erosion rates along the California coast, providing tools that can be leveraged in the planning process by communities that are now, or perhaps in the future will be, affected by coastal erosion.

A visualization shows the volume of material eroded from the California coast near Esplanade Ave. between 1998-2010. The estimated volume is approximately 200,000 cubic yards. 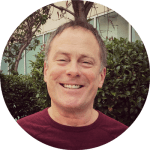