In August 2015, the National Park Service (NPS) contracted Woolpert for the Little Bighorn National Monument Mapping Project to record the locations of thousands of headstone markers at the Custer National Cemetery as well as hundreds of battlefield markers at the Little Bighorn National Monument site, which covers approximately 5.5 square miles. Woolpert used high-density, airborne topographic light detection and ranging (lidar) data acquired via a separate contract to create an accurate terrain map of the site as well as a base map for the digital database. 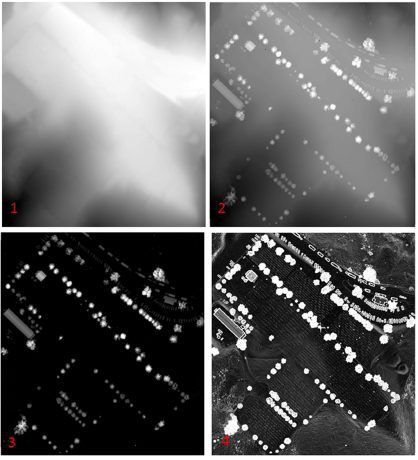 We usually do feature extraction for larger objects, such as roads and buildings, notes John Gerhard, Woolpert geospatial program director. Our remote-sensing analysts took the methodology used for buildings and reduced the search footprint. The feature-extraction algorithms exist; the question is where is that threshold, and how do you implement the appropriate algorithm?

The Little Bighorn National Monument memorializes the June 25-26, 1876, battle between the U.S. Army's 7th Cavalry and the Lakota Sioux and Cheyenne warriors in what was then the Montana Territory. A reported 263 soldiers died in the battle, including Lt. Col. George A. Custer, in what became known as Custer's Last Stand. 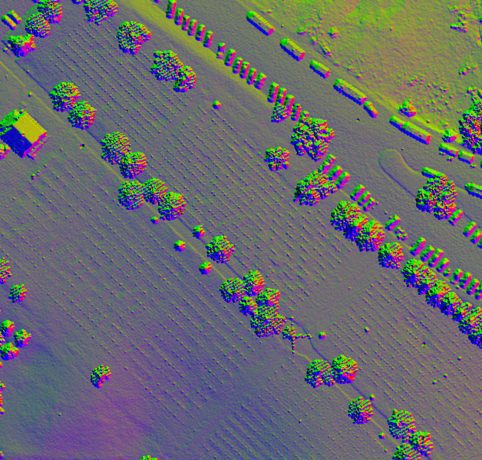 Directional illumination cast across the hypothetical sky accentuates the shadows cast by each cemetery marker.

To honor and protect this historic site, the NPS wanted to create an accurate, digital database of the more than 4,320 headstone markers and 280 battlefield markers, which identify where the battle took place and where soldiers fell.

Mapping at the national site had been cobbled together through the years from multiple sources, none of which was up to date. Chris Ziegler was the chief of cultural and natural resources at Little Bighorn National Monument during the mapping project. 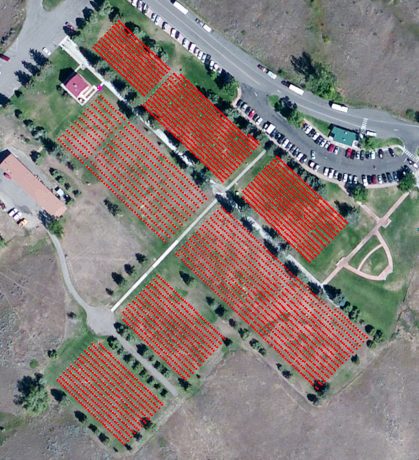 We had maps from the 1970s, 80s and 90s created by archeological surveying, notes Ziegler. These began as paper maps, but we started putting them into GIS. We also had historic maps going back to the 1800s. Those are valuable to have, but they weren't spatially useful.

The Custer National Cemetery, which includes soldiers from multiple forts throughout the west, was in worse shape.

The site was gridded out on poster board with the sequencing and cascading of graves in order, but not pinned to a location, adds Ziegler. We had to sort through paper maps to try to get an approximation of where a grave was located. That couldn't be made into a usable feature for visiting loved ones. Battlefield markers also were extracted from the lidar data via MHHC, a three-step process that locates the center of gravity corresponding to the location of the marker.

It also could be used to create general display maps to better represent the topography of the lands and perspectives of the battle.

We wanted to add to the culture of knowledge to help people better understand this national resource, says Ziegler. We've got to maintain that relevancy, and we do this by keeping up with technology. 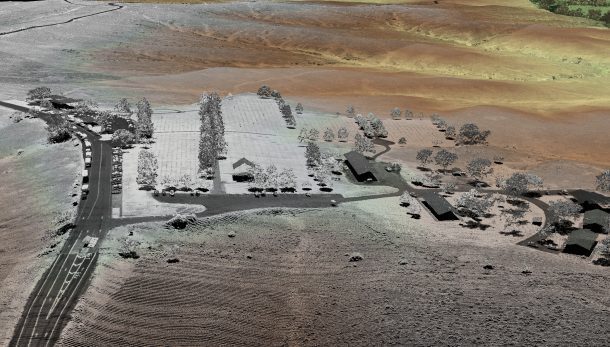 Woolpert recently had been contracted by the U.S. Geological Survey (USGS) to collect airborne topographic lidar data of the Little Bighorn site. This lidar data is contributing to 3D Elevation Program (3DEP), a USGS initiative to create a high-quality national map, the data from which can be used for multiple state and federal purposes.

The NPS used the lidar data for this headstone feature-extraction project at Little Bighorn, adds Gerhard. It also helped with costs, since that data was already available. It will continue to be available, as well, since it will go into the 3DEP database. 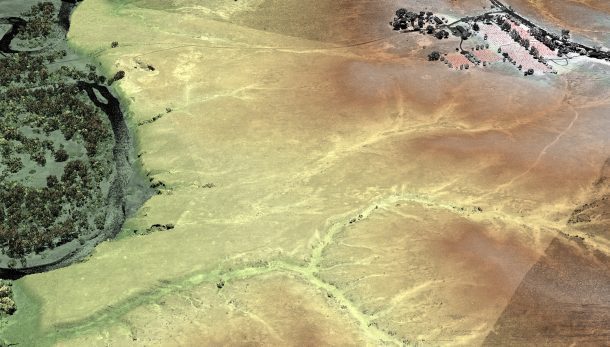 An oblique view of the cemetery point cloud shows feature-extracted headstones in the distance.

The lidar data were acquired with a Leica ALS70 sensor system onboard a Cessna Titan 404 aircraft at a point density of 12 points per square meter. This exceeded the USGS Quality Level 1 (QL1) lidar density requirement of the initial project, equating to a point every four inches.

With the multiple uses possible with this type of dataset, we decided to acquire the Little Bighorn National Monument at a very high density, adds Gerhard.

At Custer National Cemetery, which is an area within the Little Bighorn National Monument, there are 4,320 headstone markers of varying historical relevance. There are an additional 287 markers scattered throughout the battlefield site. Woolpert was tasked to locate and measure each of these headstone and battlefield markers. 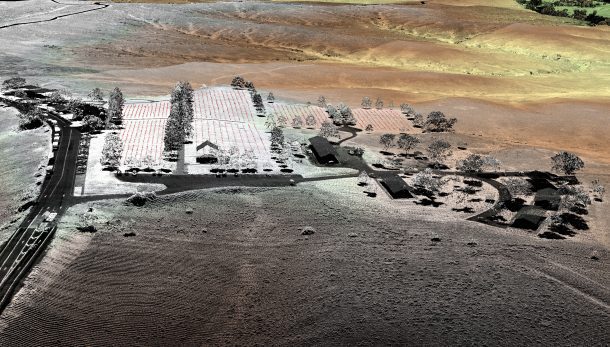 There are more than 4,320 headstone markers in the Custer National Cemetery, an area of about 8.6 acres. This point cloud indicates the feature-extracted headstones.

Given that the average dimensions of the markers are 13 inches long and 4-12 inches wide, it was determined that there would be at least one lidar return from any point on the top surface of the marker. Using this return, the task would involve verifying whether the return truly represented the location of a marker or possibly other above-ground features, such as tall grass.

Once the surface had been established, a method to triangulate the centroid of the polygon that represents the top surface of the marker was developed. This process had to be accomplished automatically, as it would be time consuming to locate each marker manually. Woolpert began by applying a robust ground-filtering routine. Ground filtering is the process of classifying the ground and non-ground points.

It is very important to classify the ground points in order to model the bare earth surface, notes Gerhard.

To identify the most-suitable ground-filtering methodology, a review of the geomorphology and local environmental conditions throughout the site was completed. Among the elements considered were slope and elevation difference, surface cover and point density. A variant of the multidirectional ground-filtering algorithm was used to filter out the ground points for the project area.

To amplify the effect of the illumination, four shaded relief models were created by positioning the light source in 90-degree increments from a 45-degree azimuth and at a 30-degree altitude. A 45-degree azimuth was chosen because that was the general orientation of the cemetery. Directional illumination across the sky accentuated the shadows cast by each marker. 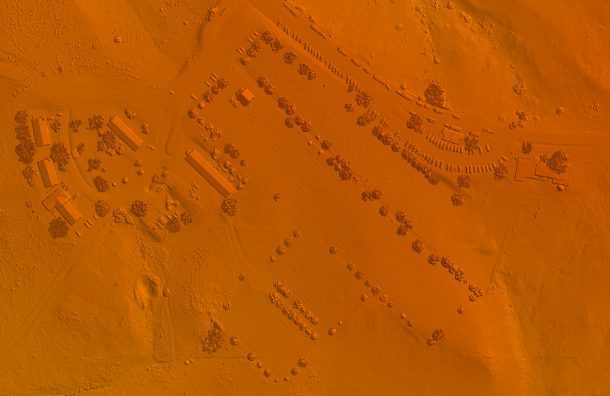 Then a three-step workflow was utilized for the feature-extraction process using Multi-Hill-shade Hierarchic Clustering (MHHC), which incorporates the variously illuminated and rotated hill-shades. This workflow began by applying an edge detector to find the marker edges. Next, a threshold to produce a binary edge raster was applied. And lastly, a segmentation routine was used to extract the shadows cast by each marker as polygonal features. The resulting polygons then were used to extract a centroid, which is the center of the corresponding location of each marker.

An algorithm was developed that established and confirmed the location of the markers' center points.

Through this process, an overall classification accuracy of 99.7 percent was achieved, with the remote-sensing analysts identifying 4,320 markers. Only 12 headstone markers were not located due to the fact that they were covered by a heavy tree canopy. All 287 battlefield markers were located.

The NPS now has an accurate, detailed headstone map and database to use to preserve and commemorate Little Bighorn National Monument.

To put it simply, the battlefield and cemetery markers at Little Bighorn are historically significant national treasures, notes Ziegler. The fact that they kept permanent markers at this site is very powerful. When you go to Gettysburg or another historic battlefield, it's something to say that ˜all these people died here.' But when you know exactly who this person was and exactly where they died, it really adds a poignant physical connection to that history. Location is key to that.

The project earned a 2015 MAPPS Geospatial Excellence Award and was historic for Woolpert.

Woolpert was able to use modern mapping technology to benefit and enliven a historically significant site, which will be accessible for generations to come, adds Gerhard. It was a great project to be a part of.