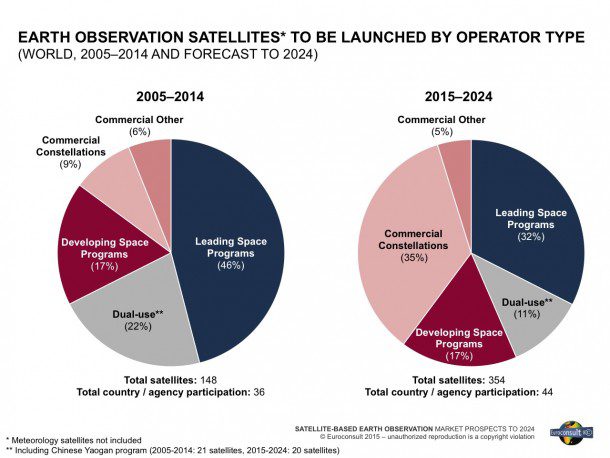 Between 2005-2014, 179 Earth-observation (EO) satellites (> 50 kilograms) were launched by civil government and commercial entities from 36 countries. Supply is expected to go through significant expansion, resulting in the launch of 427 satellites from 2015-2024. This will translate to $38.8 billion in manufacturing revenue during this period.

The number of countries to launch EO satellites also is expected to increase during that time. The increase in satellite units is driven by fast-developing and emerging programs as well as the launch of several commercial EO constellations, which aim to build services that exploit the high-frequency revisit (temporal resolution) offered by the constellation approach. In addition, further solutions are expected to emerge from cubesat technology (< 50 kilograms), with several constellations being developed. The emergence of these low-cost constellations has the potential to disrupt the market by opening up new service areas and applications that require high revisits (for frequent change detection), and by offering data and solutions at a lower price.

In 2014, $9 billion was invested in EO programs. More than 50 countries contributed to this investment (not all resulting in the development of a specific satellite), a ninth year of continued investment growth. Government priorities depend on the stage of development of its EO program and wider government policy objectives. 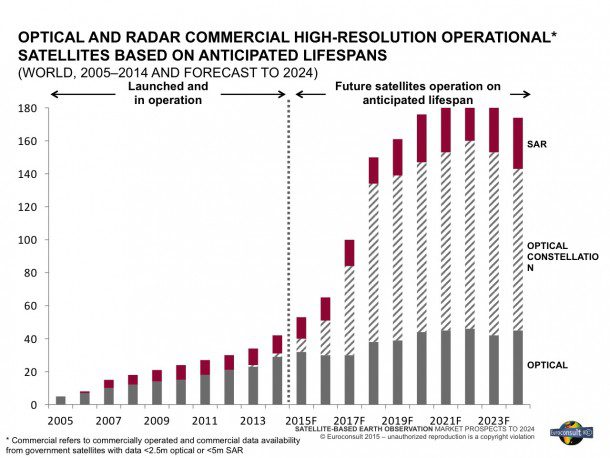 Environment monitoring and climate change remain top priority areas in governments' political agendas, supporting the development of science-driven EO missions within R&D programs such as NASA, ESA and JAXA. Other EO programs are expanding rapidly with countries such as India, China, Russia and South Korea, which are striving toward self-sufficient data collection and diversification of programs into more varied missions. In emerging programs (such as Malaysia, UAE and Algeria), EO is a tool to help develop a national industry and support local data requirements. Such emerging programs often are developed within a technology-transfer program with established industry or agency partners to help develop domestic industrial capabilities.

Programs in North America and Europe have undergone a period of austerity, resulting in lower-than-anticipated budgets during the last couple years; however, investment levels in 2014 increased to support the development of new flagship programs, such as JPSS in the United States, Copernicus Sentinels in Europe and RCM in Canada. To support wider environment-monitoring missions, agencies such as NASA and the European Space Agency (ESA) have sought ways to reduce cost while maintaining support for R&D. This approach has led to increasing cooperation in science-driven missions (as have other agencies, such as CNES and JAXA), and shifts toward less-costly and more policy-responsive satellite missions with shorter development times. 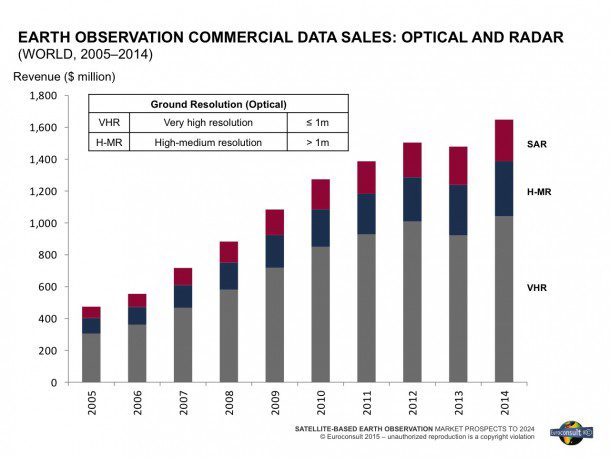 Elsewhere, China's budget continues to increase to support the extensive development of its program within themes targeting specific application areas. The country will launch more than 40 satellites in the coming decade, more than any other. As with China, the aim of the Indian and Russian programs also is to develop satellite series in specific themes to develop a fully autonomous data-collection capability.

In addition, more countries are investing in EO programs and technology: Kazakhstan, Venezuela and Vietnam are the latest to launch EO satellite capacity, and others, such as Bolivia and Peru, are expected to follow shortly. There are several reasons why countries invest in EO. The first is to develop industry leadership to attain autonomous manufacturing capabilities and, potentially, the development of a space program. A lower cost of entry in comparison to other satellite applications also makes the sector attractive.

Emerging programs will account for a growing part of the manufacturing market. Between 2005-2014, 12 percent ($2.1 billion) of the total EO manufacturing revenues were derived from such programs; these are expected to more than double to more than $4 billion between 2015-2024 (15 percent of the total market). These emerging programs commonly partner with established prime manufacturers in other regions to gain know-how through technology transfer (or technology localization). Technology transfer will remain an essential component of these export contracts to help develop a national industry that supports wider economic growth. With this, further countries are building full manufacturing capabilities: By 2024, more than 25 countries are expected to have this. 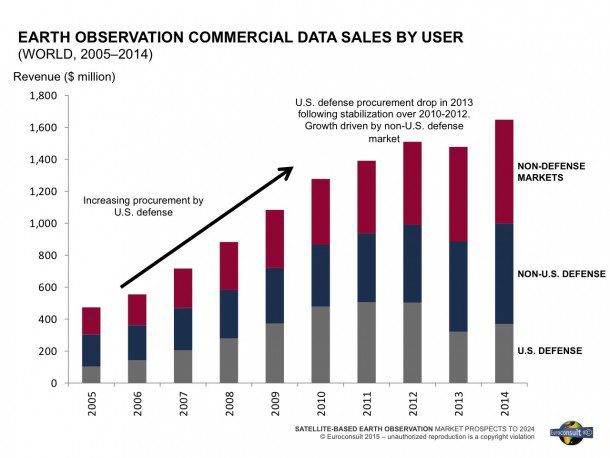 A more direct approach for procurement is taken by countries requiring satellites to fulfill a more-immediate defense/dual-use role. For instance, the UAE ordered FalconEye and Peru a satellite system from an Airbus-led consortium; Morocco ordered two satellites from Airbus Defense & Space and Thales Alenia Space. The procurement costs of these more-capable systems are measured in the hundreds of millions, compared to the tens of millions for first- or second-generation satellites built through technology transfer. These export opportunities may be more limited than the lower-cost supply, but do offer higher margins.

Return to Growth in the Data Market

The commercial data market totaled $1.6 billion in 2014; a 12 percent growth over that of 2013. This return to growth follows a couple years' slowdown resulting from the reduced procurement by U.S. defense (through the National Geospatial-Intelligence Agency (NGA)). This reduced procurement, however, disguised growth elsewhere, particularly in non-U.S. defense markets, which remain a key growth area. Continued global tensions and limited suitable proprietary very-high-resolution, high-accuracy data supply for defense is driving the need for use of commercial solutions in image intelligence. The non-U.S. defense market grew at a 13 percent compound annual growth rate (CAGR) during the last five years, topping $600 million in 2014. In total, defense markets represent $1 billion, 63 percent of the total data market. No other vertical market is responsible for more than 10 percent of the commercial data market value.

Non-defense markets totalled $650 million in 2014 (12 percent five-year CAGR). Natural-resources monitoring and support for infrastructure and engineering projects are important application areas in developing regions to foster wider economic growth. However, sectors such as energy have been impacted by lower oil and gas prices that are limiting exploration activities. Location-based services applications, including market- and business-intelligence applications, also have been slower to develop, but the longer-term outlook for these services remains positive with the addition of new supply targeting high-frequency change detection.

Regionally, North America remains by far the largest consumer of commercial EO data, totalling more than 40 percent of the $1.6 billion data market in 2014. U.S. NGA procurement of commercial solutions takes up much of this total. Europe remains the second-largest market for data, but other regions, such as Asia, are displaying a much stronger growth profile (17 percent CAGR during the last five years) and are expected to surpass Europe by 2020. The Russian and Commonwealth of Independent States regional market has taken a downturn, largely a result of ongoing tensions and the reduction of data sales in the region from third-party suppliers. Defense is expected to remain the main driver for commercial revenues across all regions, but increased demand for satellite imagery is driven by numerous applications to support wider economic development, such as in infrastructure, engineering and natural-resources monitoring.

The number of satellites in operation offering commercial data solutions is expected to be in the 160-180 range by 2024. This includes satellites from private enterprise and governments that are commercializing data. Today, approximately 40 satellites offer commercial solutions. The increase in the supply figure represents fleet expansion of existing operators to respond to growing demand, more governments commercializing data to receive a return on investment from the initial satellite funding and new commercial entrants. These numbers exclude satellites below 50 kilograms in mass (such as cubesats) that offer a further alternative supply.

New entrants are emerging with approaches evolved around the development of lower-cost constellations. The purpose of gathering data from these satellites varies (e.g., meteorology, environment/resources applications and higher-resolution data delivery); however, all are focused on acquiring data and delivering services at high frequency with a reduced satellite revisit.

As of July 2015, these companies had attracted more than $450 million in venture capital to fund their initiatives, and Skybox Imaging was acquired by Google for $500 million”this level of investment is unprecedented in the EO sector. It's important to note that none of the newly announced constellation initiatives have reached full capacity. For these constellations to come to fruition, additional investments are expected to be required. 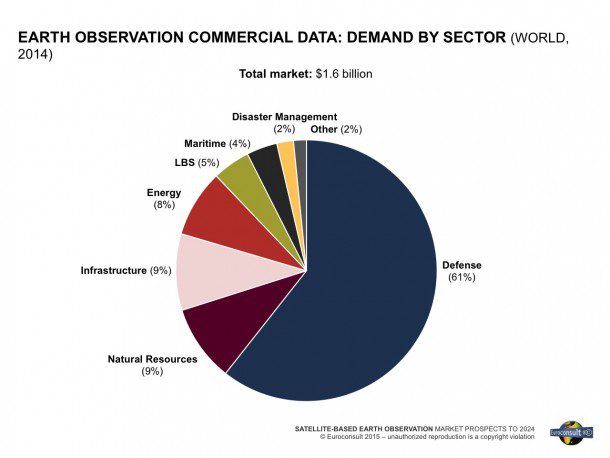 New entrants, such as Planet Labs and Urthecast, have gone a step further to acquire existing assets: Planet Labs acquired the geospatial business of Blackbridge (and its RapidEye constellation), and Urthecast acquired the assets of Deimos Imaging. Bringing these existing satellites into these companies enables them to build and deliver services as well as develop platforms that can integrate new satellites after they're launched. Know-how also is brought as well as existing client bases.

The lower-cost approach, reducing capital expenditure, means operators can price data very competitively with the potential to disrupt the market. The geolocation accuracy of the systems remains an issue (smallsats are less-stable platforms, and the reduced cost of the mission implies less emphasis on high-precision optics). However, improvements in post-processing allow data accuracy to be increased.

The influx of low-cost data is expected to affect vertical markets, which are more cost-sensitive, less stringent on data geolocation requirements and can benefit from high revisit. Application areas such as agricultural monitoring and infrastructure project monitoring are expected to be targeted. The constellation approach also has the potential to further develop new markets, such as support for market/business intelligence, requiring a higher temporal revisit. Defense also could be targeted if ground resolution comes below one meter, and geolocation accuracy is considered satisfactory.