March 31, 2016
Keeping the County Current: A Remote-Sensing and GIS Approach to Base Mapping 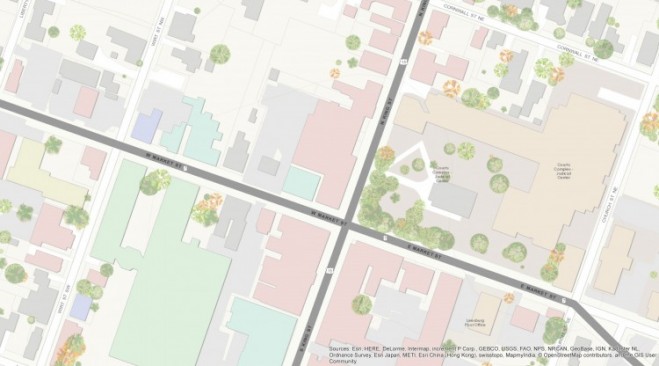 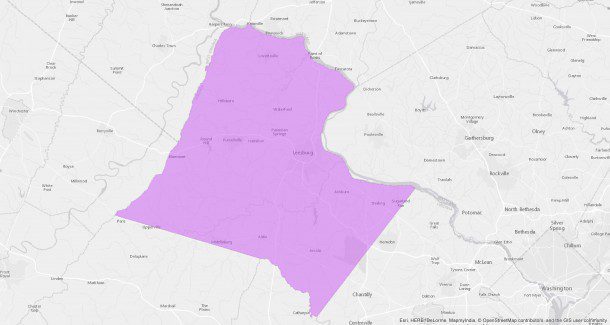 Loudoun County is one of the most-affluent and fastest-growing counties in the United States.

Loudoun County, Va., located within the Washington, D.C., metropolitan area, is approximately 520 square miles and has been one of the fastest-growing U.S. counties for the last decade. The county’s eastern portion is developing rapidly, while many western areas remain rural. This rapidly changing landscape and growing population have necessitated aggressive maintenance of the county’s base map, and aerial imagery is playing a major role.

A base map typically refers to a representation of geographic features visible on the ground in an aerial image, providing the foundation or reference upon which other data layers can be developed or mapped. Base map layers include buildings and roads, cultural features, hydrography, forest cover, contours, spot elevations and orthoimagery, and these layers are used in a variety of applications across various county departments. The resulting GIS base map is uploaded to the county GIS and distributed to users on an annual basis. 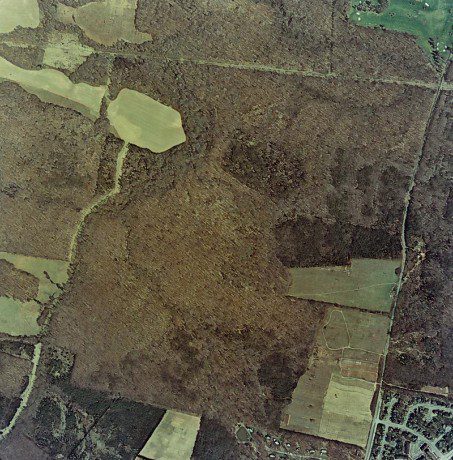 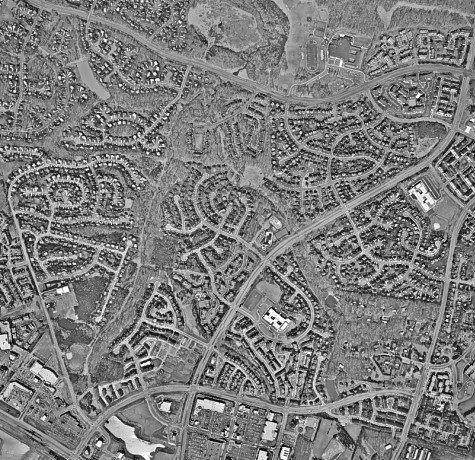 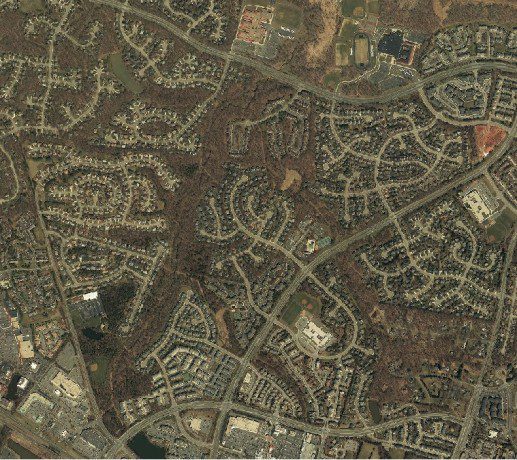 Three images of the same location show the growth of Loudoun County from 1978, 2000 and 2015, respectively.

Every year, Loudoun County selects an area to update based on development patterns, taking the following criteria into consideration:

To help select tiles for updating, the county recently developed an automated program that generates an ArcGIS mxd file and shows the results of a python script. The program considers occupancy permits, address points, building footprints and the tile index.

Using an airplane-mounted Microsoft/Vexcel Ultracam digital camera system, Loudoun County is flown each spring to capture new imagery and photogrammetric data. Aerial imagery is collected with full stereoscopic coverage, and flights are conducted when the following conditions are met: 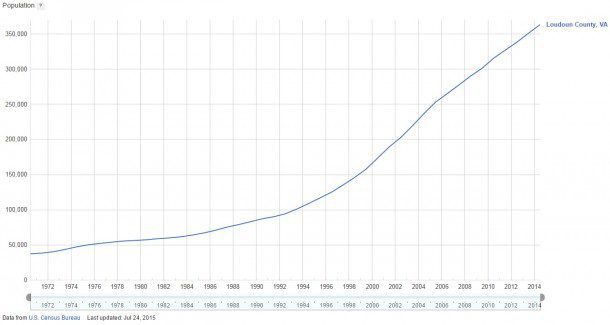 A line graph shows the escalating population of Loudoun County from 1972-2014.

After imagery acquisition is complete, aerotriangulation—the foundation for the accuracy of all derivative data products created from the imagery—is performed using ground-control points and an airborne GPS receiver. Assisted Automatic Aerial Triangulation, a refinement of conventional techniques that provides numerous automated tie and pass points, is performed for Loudoun County’s imagery by an outside vendor. After aerotriangulation is performed successfully, a digital terrain model (DTM) is compiled for orthoimagery generation as well as planimetric and topographic compilation.

Orthoimagery consists of aerial images that combine the visual attributes of an aerial photograph and the spatial accuracy and reliability of a planimetric map. Loudoun’s digital orthoimagery is 24-bit natural CIR (256 levels of value for each band, where 0 = black and 255 = white; radiometry = 4-band, 8-bit-per-channel R/G/NIR) with ground resolution of 1.0 U.S. Survey feet. The tiles are cut to conform to the county’s existing 5,000- by 5,000-foot tile scheme and written in compliance with the specific naming convention. A full mosaic of all orthophotos also is created. 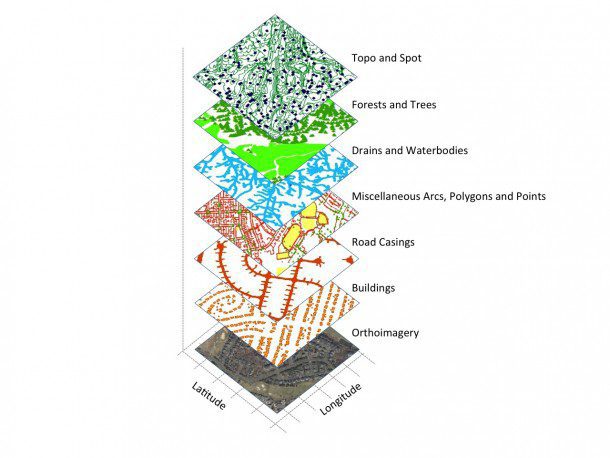 Loudoun County’s base map data model is described through its various layers.

Orthophotos are important to Loudoun County, as they’re used as a reference when mapping all other data. As part of the county’s base-map update process, digital orthophotos have been produced since 2002 and are available to GIS users via ArcGIS as well as an Aerial Archive Web application. Orthoimagery is used as a backdrop with other data layers on top. Datasets such as parcels, addresses, street centerlines, and zoning and planning districts often rely on imagery datasets.

Therefore, orthoimagery is the foundation of the county’s GIS, with various departments depending on the county’s orthoimagery and base map data to produce their own maps and analyses. One-foot countywide digital orthos are available in the following formats:

Planimetric features, such as roads and building footprints, are independent of elevation and represented on 2D maps as they’re seen from the air. These features often are digitized from rectified aerial imagery into data layers that can be used in analysis and cartographic outputs. 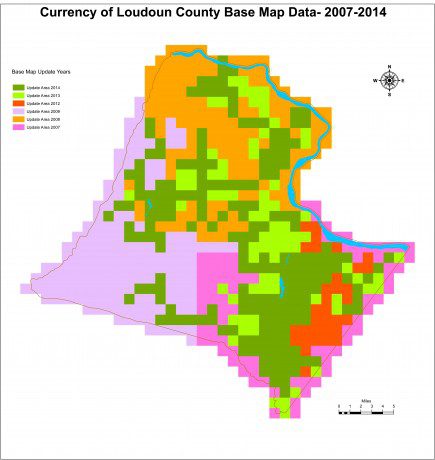 A polygon map shows the currency of Loudoun County base map data ranging from 2007-2014.

Loudoun’s planimetric features are collected from aerial imagery in a 3D stereoscopic environment via softcopy workstations that use stereo-superimposition technology to ensure accurate and complete collection of all mapped features. In stereo superimposition, planimetric features are traced in vector form directly over stereoscopic imagery displayed on a computer monitor. QA/QC ensures data meet all quality standards and specifications, and graphic editing procedures ensure the data are cartographically correct and aesthetically pleasing.

Topographic features are the relief features or surface configuration of an area, such as contours and spot elevation points, and are typically generated by automated processes. Photogrammetric techniques are used to update the county’s digital terrain model (DTM) to an accuracy level sufficient to support orthorectification and creation of four-foot contours.

Using the new aerial photography, features are updated in a 3D softcopy stereo environment at a scale of 1:2,400. After compilation, data are exported to an ArcGIS geodatabase feature class. All base map data have been tested to meet NSSDA and ASPRS accuracy requirements for such scales. 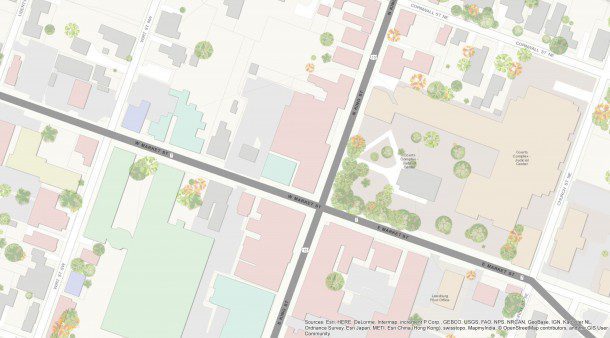 Base map data are obtainable from the Office of Mapping and Geographic Information Public Information Counter. Updated DTMs also are available on request. All data products are georeferenced in the Virginia State Plane (North), Zone 4501, datum NAD83 HARN, vertical datum NAVD88, with units of U.S. Survey feet. Metadata that meet Federal Geographic Data Committee standards are available for all base map layers, including all relevant information and descriptions.

Loudoun County’s base map offers up-to-date reference data that enable users to better understand and analyze specific geographies of interest country-wide. Loudoun’s base map meets strict accuracy and aesthetics required for planning, monitoring and tracking change in defined areas of interest to provide high-quality results. It also offers a range of values, data, attributes and fields that make Loudoun’s base map a truly customizable solution based on user requirements and specifications. In addition, through Esri’s Community Maps Program, Loudoun County’s base map data are broadly available to users worldwide.

The map’s ongoing maintenance program has resulted in a model supporting emergency response, assessment, land-use planning, transportation and other key business functions. And updating large, contiguous areas via aerial imagery has resulted in consistent and timely data for a variety of applications. Analysts, planners, business people and other decision makers use the data to discover and demonstrate spatial relationships, making it a valuable tool to explore management and policy alternatives.